Valentine’s Day is known as the time
to send love notes and cards,
including anonymous ones signed by
your secret admirer.

But not always the case in the Victorian Era... 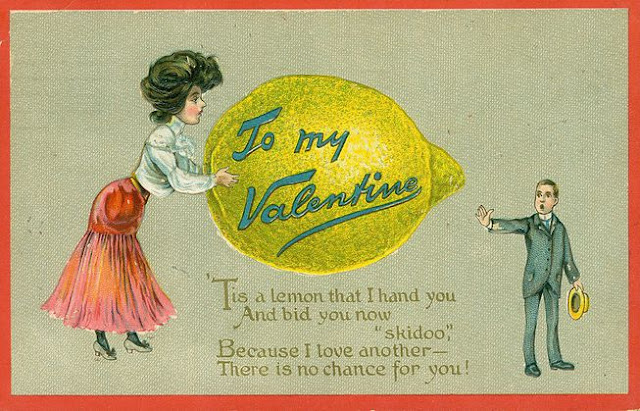 ”Vinegar Valentine’s” were sent anonymously in those days, by ladies who didn’t want the attention of a specific suitor.


These cards, according to Smithsonian, were also called “penny dreadfuls.” 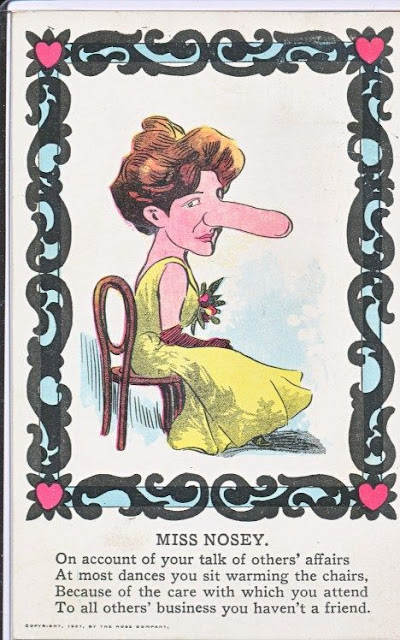 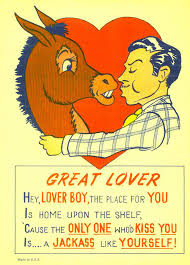 The antithesis of the usual valentine, vinegar valentines comically insulted the recipient and rejected unwanted admirers. 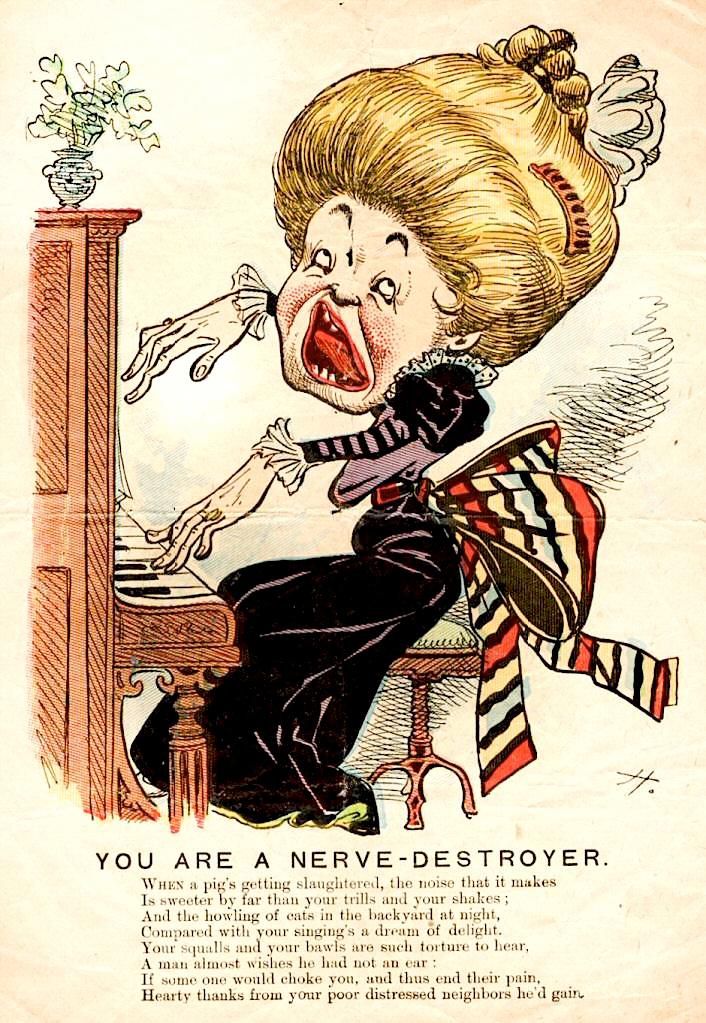 Compared to other vintage cards, there are few surviving specimens of vinegar valentines, probably because people trashed the nasty little cards! 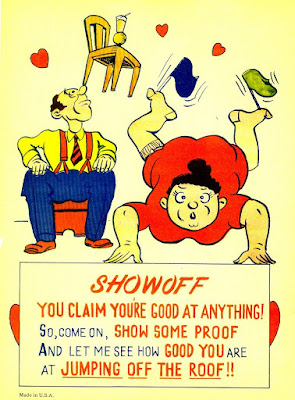 No vinegar valentine’s for us:  Bill's the romantic here, and has always surprised me on Valentine’s Day, as well as many ”non-holidays" too!   I am one lucky thankful lady!

I still have the first Valentine he gave me a plethora of years ago ~ it was very elaborate and very large, an all-satin design of roses on a card.

One billion Valentine cards are exchanged each year ~ it’s the largest seasonal card-selling occasion of the year next to Christmas.

So here’s to Valentine’s Day!


The religious history and meaning of the holy priest, Saint Valentine, dates back to February 14, 269 A.D., when he was killed on this day because of his faith.  Some legends claim that he was a Roman priest martyred during the reign of Emperor Claudius Gothicus. 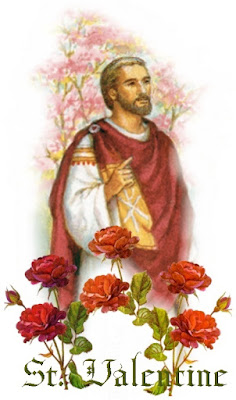 Valentine defied the Emperors’ order ~ was arrested and imprisoned upon being caught marrying Christian couples, thereby enabling the newly wedded husbands to avoid conscription.  Claudius needed these men to maintain a strong army, he believed that Roman men were unwilling to join the army because of their strong attachment to their wives and families.  When Valentine’s actions were discovered, Claudius ordered his death.

In the year 496 A.D., his “Saint Day” was established. He is associated with “Love” because he fell in love with the daughter of his jailer, and left a farewell love note to her. His final note before he was executed read “from your Valentine.”

According to legend, during the Roman Festival of Lupercalia in the 15th century, women would put their names in an urn and be selected to be paired with a man for a year ~ sort of like a lottery for young men to decide which girl would be theirs.

In the 17th century, a hopeful maiden would eat a hard-boiled egg and pin five bay leaves to her pillow before going to sleep on Valentine's eve. It was believed this would make her dream of her future husband. 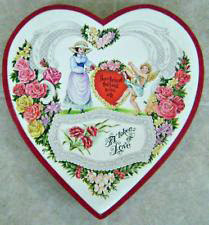 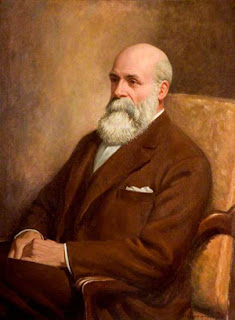 The first heart-shaped box of chocolates was introduced in 1861.  It was created by Richard Cadbury, son of Cadbury founder John Cadbury, who started packaging chocolates in fancy boxes to increase sales.

About 55% of Americans celebrate Valentine's Day and spend an estimated $20.6 billion a year, including more than $1.9 billion just on candy alone. This year specifically, men say they expect to spend $338 on Valentine's Day. And the women? Just $64.  Hmmm! 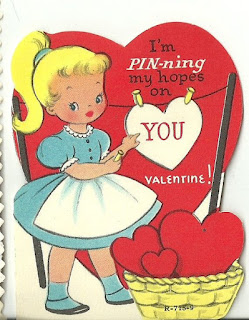 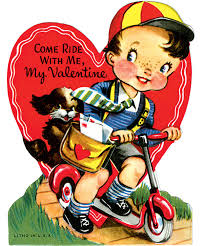 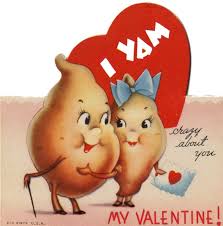 Teachers will receive the most Valentine’s Day cards, followed by  children, mothers, wives, sweethearts and pets.  I’ve had many pets over the years, but it never occurred to me to give them a Valentine!  Have you given yours one?

Like to dine out for Valentine’s Day?  Take your favorite person to White Castle.  The restaurant switches up its usual fast-food vibe with hostess seating, table service, and menu that includes shrimp nibblers and strawberry and cream waffles.  Get your reservations in soon! 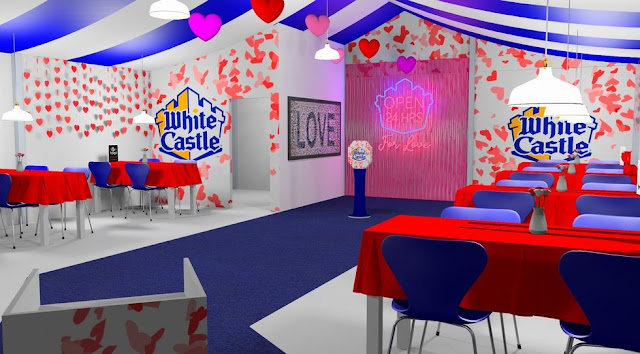 Or, if dining in, make something special like these heavenly Chocolate Drizzled Ice Cream Puffs for dessert, Profiteroles by Ina Garten!

What could be a greater way to celebrate Valentine’s Day with your sweetheart, than by eating one of these decadent ice cream filled pastries drizzled with chocolate!

How to cook Profiteroles with Chocolate Sauce

What a great post!
I've enjoyed all of it: the 'vinegar valentines' as well as the 'sweet valentines', the heart-shaped chocolates and decorations, the unforgettable red color, St.Valentine's handsome figure, the profiteroles.
History, humor,love, romanticism, and a delicious recipe - all combined to make us, readers, happy. Thanks, Pam.

What an interesting post, I have never hear of Vinegar Valentines before. The profiteroles look amazing. Happy Valentines day. Diane

Thanks, Duta! Vinegar valentines got my attention and it's a great day for love and celebrating, and red hearts and all. Glad you liked it! Take care

Thanks, Diane! Vinegar Valentines are new to me, I sure wouldn't like one! And I agree about the profiteroles! Happy Valentines Day to you! Take care

Congrats, you made me learn something today. I'd never heard of Vinegar Valentines before!

I have never heard of "vinegar valentine's"...super interesting...but I would love a couple of the cream puff with ice cream...they are perfect for the occasion...Happy Valentine's Day Pam!

Hi Son! Great, thanks! You know what I always say... I've never heard of the vinegar cards either, interesting in a weird way, I guess. Love

Thanks, Juliana! I like the cream puffs and with ice cream would be even better! Glad you thought the vinegar cards interesting too. Take care

Profiteroles are my husband's favourite! Yours look awesome, Pam. And those V-day cards are really fun.

Hi Angie! We like them too! Thanks, and have a good week!

Pam, what a fun post and great recipe. I learned a lot today. I also have never heard of vinegar valentines, I love the first one. Wow, and to think I thought Hallmart or Hershey invented the day. Chloe dog has been known to get a special Valentine's treat. White Castle having a Valentine dinner sounds intriguing. I wonder if "Harold & Kumar" know about it.

Ha, thanks, Ron! Funny with Harold & Kumar, they'd probably be too stoned to know. 😝 I liked vinegar valentines, pretty funny but wouldn't want to be on the receiving end. Good for Chloe, she's so sweet looking, I'd double up on treats for her on Valentine's Day! Take care

Ha ha I’ve never given a Valentine to a pet. I’d love these profiteroles. Sounds like you are a lucky lady.

Thanks, Cakelaw! I never have either and just wish we had one now! 😊

I have a slew of antique post cards. I am going to go through them. I had never heard the vinegar story so thanks. The cream puffs look delicious, Pam. Happy V-day!

I have never heard of vinegar valentines. We didn’t have Valentine’s Day in Germany when I was a kid. My first graders loved valentines card. It was fun. Your profiteroles look so good. Happy Valentine’s Day,

I love anything vintage,that was such a joy to look at! Those profitelores look absolutely yum☺

Hi Debra! Be kind of funny if you came across a vinegar one. I like the cream puffs too. Thanks, Happy V-Day!

Hi Gerlinde! I love Germany! Yes, Valentine's are great fun for kids. Have a good rest of the week, and Happy Valentine’s Day!

Ah, thanks Natalia! Vintage things fun to look at. Glad you like the sweet treat too! Take care

Your collection of anti-valentine-sentiment valentines is amazing. I am trying to imagine anyone actually sending such insulting cards, but it's really difficult to picture how they could do it. Their sense of humor must have been different from modern ideas of what's funny.

Hi Mae! I agree with the "anti cards." Pretty amazing and I'm glad that trend ended. Not sure why anyone would send one. Glad you like the recipe!

Pam, I'd never heard of 'vinegar' valentines so your post was an education! Nice collectibles too... The history is interesting too. I didn't know that Cadbury produced the first heart shaped candy box. As for the Festival of Lupercalia, I don't think that the 'me too' movement would buy in on it today! We keep Valentines Day simple. This year we're going out for a nice dinner the day before thereby avoiding the crowds...and I'm making breakfast on the Day itself. Take Care, Big Daddy Dave

Hi Dave! I was a bit surprised with Cadbury also, and I think you're right about the Festival of Lupercalia! Sounds like you will have a nice Valentine's Day celebration! And breakfast will be perfect, I'm sure! Thanks!

Schnitzel and the Trout said...

I have never heard of the vinegar Valentines, but I love them. Left no doubt if he loved me or not!! Thanks for sharing such a neat post. Susan

Hi Susan! The vinegar Valentines are funny and different for sure. Great to see you here, hope all is well! Thanks and take care

Thanks, Gloria! Hope you had a great Valentine's Day! Take care

Too funny! I've never heard of a vinegar card, but they are definitely amusing unless you're the recipient, LOL. We're having our second Valentine's dinner tonight as our sons are joining us for dinner. Have a great week!

Hi Liz! I bet you had a great dinner with an awesome dessert! Thanks and take care.