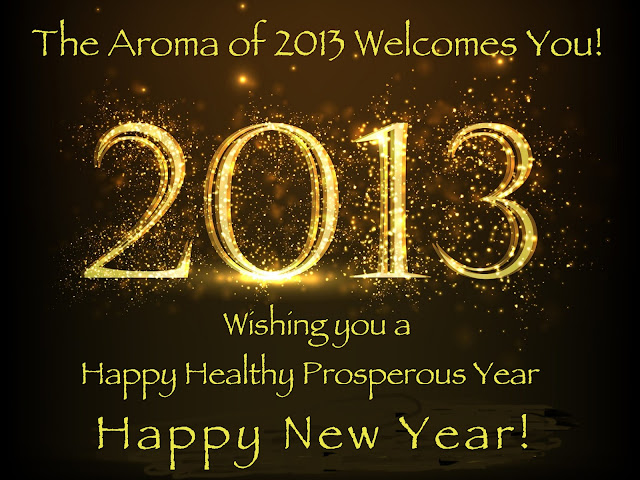 "...many of the great cuisines of the world -- Chinese, Japanese, Middle Eastern, Spanish, French and Italian, just for starters -- have long recognized that dawdling over small servings of many different dishes, sharing tidbits and discoveries, not only stretches out a pleasant social evening but bonds friends together in a very emotional way. In fact, the very word "companion" comes from the Latin com panis, or "with bread," meaning the person you share meals with -- friendship defined by dining...The most familiar versions are Middle Eastern mezze and their Spanish derivatives tapas; Chinese dim sum (meaning, sweetly, "touch the heart"); French canapes and hors d'oeuvres (themselves derived from the Russian zakuski); and Italian antipasti. In Vietnam, such drinking dishes are called "do nhau" -- literally, "little bites," and sounding not unlike "doughnut." The Thai, who might be the world's masters of outdoor gourmet dining, call them "kanto." Indians refer to samosas and other such little fried finger foods, cheerfully enough, as "chat."
---"Bite-Size Cusine," Eve Zibart, Washington Post, Sept. 4, 1998

These tiny tomatoes are marvelous straight out of the oven.  Roasting enhances their natural sugar and juices; adding the maple syrup intensifies their sweetness.  This recipe is adapted from Saveur. 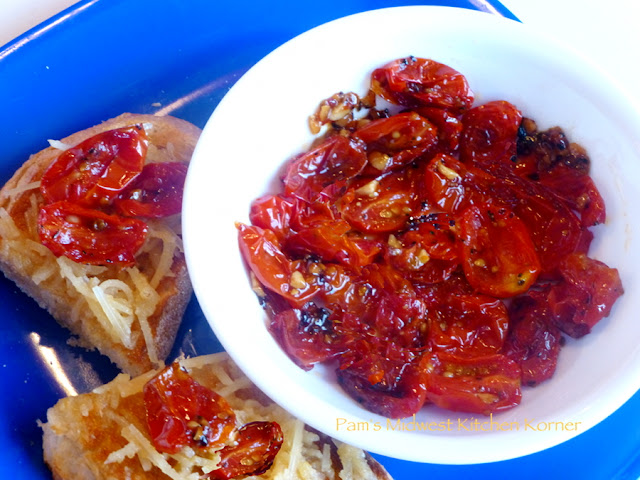 With a supply of toothpicks, this will be a tasty appetizer for you to serve on New Year’s Eve just as they are; or, topping baguette slices slathered with a little garlic butter and freshly grated Parmesan cheese, or simply spread with goat cheese.

Other than an appetizer, they are perfect on salads, pastas, pizza, or even on your scrambled eggs for breakfast.  This could be your go-to appetizer that takes little time, and ingredients.  A hit for your crowd!

Heat oven to 400 degrees.
Arrange tomato halves cut side up on an aluminum foil-lined baking sheet.
Whisk together remaining ingredients and drizzle over tomatoes.
Bake for 20 minutes, then stir and add a couple of tablespoons of water if they appear too dry.
Return to oven and bake for another 20-30 minutes until tomatoes are browned on bottom and begin to collapse.

Merry Christmas to you... 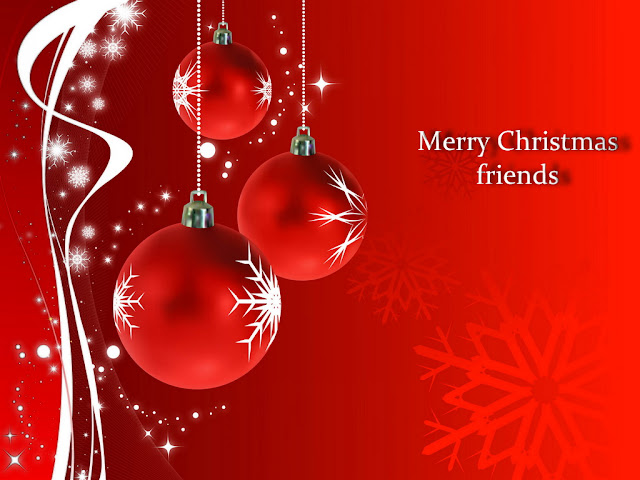 May the lovely spirit of Christmas bring you lots of
peace, joy and happiness.


May it bless you all through the year.


Here's wishing you all a Wonderful Christmas! 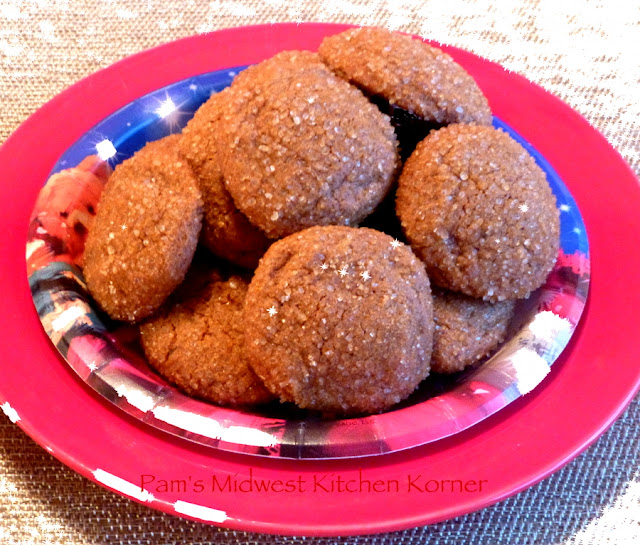 Fresh ginger takes baking to a whole new level.  It’s sweet, yet pungent.  And for full-out ginger flavor, these cookies not only have fresh ginger, but also ground ginger and chopped crystallized ginger also.

Adding crystallized ginger, gives them a stronger ginger flavor, along with a more chewy texture. The sweet and rich, amber-colored light molasses imparts a buttery flavor, with a smack of bitterness. Then they’re finished with a little crunch from the coarse sugar they were rolled in. 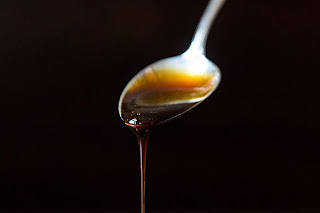 Chewy Ginger Cookies have a warm, spicy flavor, while being soft and chewy.  They are delicious and the aroma as they bake is a bonus!  These flavorful cookies will be gone in a flash when you make them!

Beat the butter and granulated sugar in a large bowl with a mixer on medium-high speed until light and fluffy.
Beat in the molasses, egg and fresh ginger.  (The mixture may look curdled.)
Reduce the mixer speed to low, add the flour mixture and beat until combined.
Stir in the crystallized ginger with a rubber spatula.
The dough should be soft but not sticky; if it’s sticky, refrigerate for 15 minutes.
Form tablespoons of dough into balls and roll in the coarse sugar.
Place on baking sheets 2” apart.
Bake until the edges are set but the centers are still soft, 12-14 minutes.
Let cool for 5 minutes on the baking sheets.
Transfer to racks to cool completely.
Makes 30 cookies. 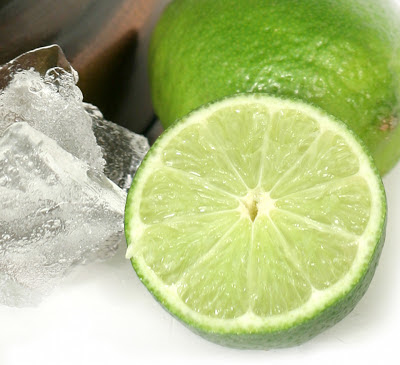 Needless to say, lime was a rarity in our house, when I was growing up.  Way back when, you could purchase lime Life Savers by the roll ~ pure bliss, and I enjoyed my share of them.

Then, when I had my very own kitchen, I made up for lost time with limes ~ lime in lemonade, salad dressings, marinades, cakes, stir-fries, drizzled over seafood, Key Lime Pie and Gin Rickey’s.  Now, I hear that to get rid of a headache, rub half of a lime over your forehead.  I just might, the next time I have one.  And then, there are these…

Delicious Key Lime Coins, a dainty little cookie.  Not too sweet, and just a little zesty.  With their perfect balance of sweet and tart, they will melt in your mouth.  They have a light, crisp taste and a crunchy texture, while a little dusting of confectioner’s sugar is the finishing touch.

In large mixing bowl, beat butter with an electric mixer on medium to high speed for 30 seconds.
Add the 1/3 cup powdered sugar, lime peel, lime juice, water and vanilla.
Beat until combined, scraping bowl.
Beat in flour, cornstarch and salt until combined.
Divide dough in half.
Shape each half into a 10-inch-long roll, wrap rolls  plastic wrap.
Chill for at least 3 hours or for up to 2 days.
Preheat oven to 325 degrees.
Line cookie sheets with parchment paper.
Using a sharp, thin-bladed knife, cut rolls crosswise into ¼-inch-thick slices.
Place slices 2 inches apart on the prepared cookie sheets.
Bake for 15 to 18 minutes or until bottoms are just golden.
Cool on cookie sheets for 4 minutes.
Place the 2 cups powdered sugar in a large bowl.
Gently toss warm cookies, two or three at a time, in powdered sugar.
Transfer to a wire rack and let cool.
Makes 80 cookies.

Melt in your mouth goodness!


Now don’t you be looking at pictures of pinwheel cookies over the Internet, because they will make mine look bush-league! 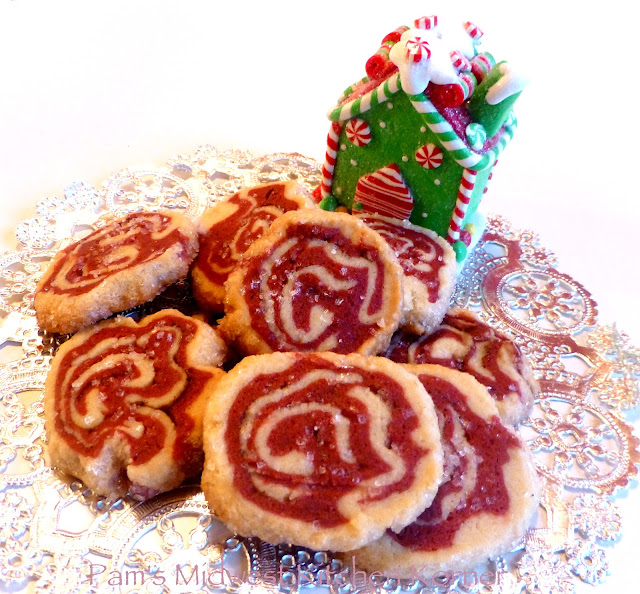 My pinwheels look like I’ve never made them before, and that’s because, I haven’t.  But boy, are they good!  They became a bit squished in the making, and I couldn’t control them, and then squished again in the refrigerator.  That won’t stop me from making them again though ~ I’m intrigued and want to master the technique now.

These cinnamon pinwheels are lightly spiced with cinnamon and are a thin, crunchy cookie, close to shortbread.  Next time, I’ll go for the ½-teaspoon cinnamon extract.  I like the swirly effect and red coloring ~ even if they do look a bit psychedelic to me… 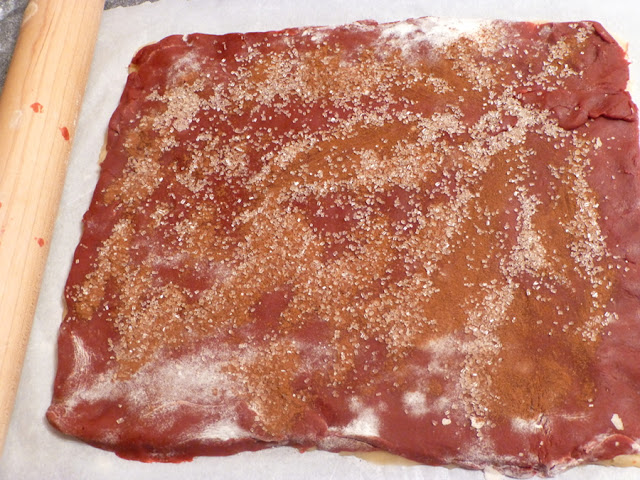 Whisk the flour, baking powder and salt in a medium bowl.
Beat the butter and granulated sugar in a large bowl with a mixer on medium-high speed until light and fluffy.
Beat in egg and vanilla.
Reduce mixer to low, add the flour mixture and beat just until combined.
Remove half of the dough and wrap in plastic wrap.
Add the cinnamon extract, cocoa powder, and food coloring to the remaining dough and beat until incorporated; wrap in plastic wrap.
Refrigerate both pieces of dough until firm, about 1 hour.

Dust the dough with flour and roll out each piece on parchment paper into a 10-inch x 11-inch rectangle.
Flip the red dough on top of the plain dough; remove the top piece of parchment and trim the edges.
Sprinkle the ground cinnamon and 1 tablespoon of the sanding or sparkling sugar on top.

Starting from a short end, tightly roll up the dough, using the parchment to help.
Roll the log in sanding sugar.
Wrap in plastic wrap and refrigerate until firm, at least 3 hours, or overnight.

Preheat oven to 350 degrees and position racks in the upper and lower thirds of the oven.
Line 2 baking sheets with parchment.
Slice the log crosswise ¼” thick.
Arrange the slices about 1½” apart on the baking sheets.
Bake, switching the position of the pans halfway through, until slightly puffed and lightly golden on the bottom, 12-15 minutes.
Let cool 5 minutes on the baking sheets.
Transfer to racks to cool.
Makes 3 dozen.

The recipe is a keeper!


Sometimes I fancy chewing my liquor, instead of nipping it…

And this is the cookie that meets that criterion! 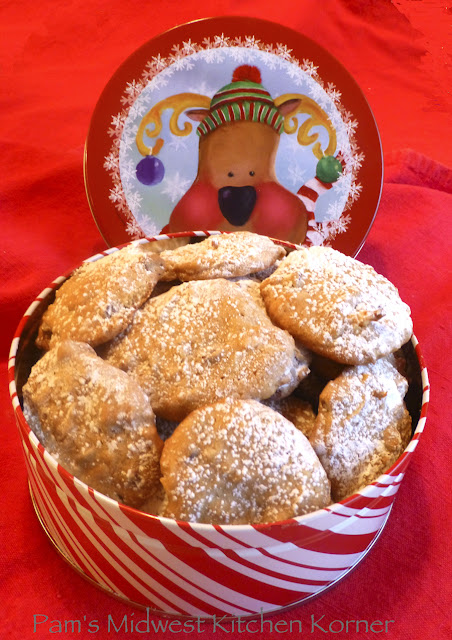 This cookie has great flavors ~ Bailey’s Irish Cream ~ coconut and chocolate.  They taste like Bailey’s and even smell like it.  Due to the cake flour, they have a light texture.  This is definitely a grown-up cookie, with a slight hint of whiskey making them appealing. 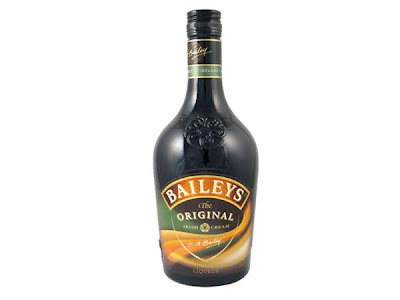 Note the large amount of cookies this recipe makes.  They go fast; therefore, I make 6 dozen at a time ~ halve it, if that suits you better.  I like pecans in cookies, but some family members do not, so I omit them in this recipe. If you like them, add 1 cup of chopped pecans.

These irresistible cookies are a bit boozy, a bit sweet, and a whole lot tender ~ a perfect Christmas treat for your family and friends too!