From the days of the Vikings, the Early Middle Ages, cod was essential in enabling them to sail across the ocean.


They dried freshly-fished cod in the cold North Sea winds, until it became hard as a stick, and could be easily preserved and carried on their Atlantic voyages.

On the boats, they broke “stockfish” into pieces and chewed on it.  It was definitely not a culinary delicacy, but it did serve as a great source of protein.  Remarkably, cod contains 18% protein, which rises to almost 80% when dried.

Cod has always been a good quality and fairly inexpensive fish that is available throughout the year, but like other species, it may be overfished.  It’s a mild buttery tasting fish that is adaptable to virtually all methods of cooking ~ but I draw the line at drying it! 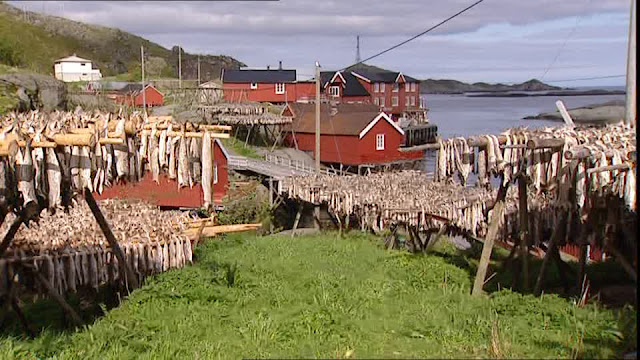 Drying cod at Å, Moskenesoy, the southernmost tip of the main Lofoten Archipelago in Norway,
known for its dramatic scenery, with peaks like the Svolværgeita pinnacle jutting up into the sky,
with the Himmeltindan Mountain nearby. 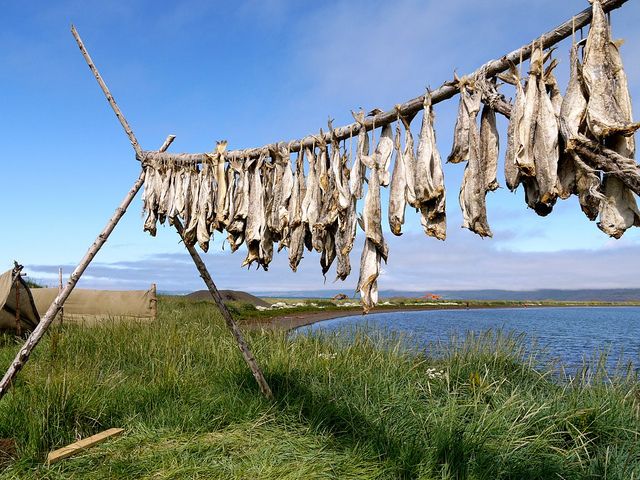 Forget about the frozen fish sticks in the grocer's freezer section, and opt for these nuggets, they’re so much better, and your whole family, kids and adults both will enjoy them!

Make a crisp savory coating of Panko bread crumbs, salt and pepper, and paprika, mixing garlic in for a little kick. 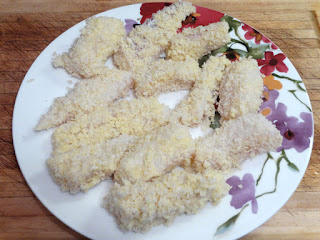 I especially like them made the healthy easy way in my Power Air Fryer, but the oven works well also, for cutting calories without sacrificing flavor. 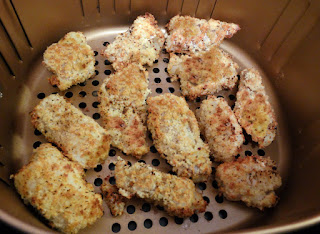 This is a speedy easy weeknight dinner that you can feel good about eating. 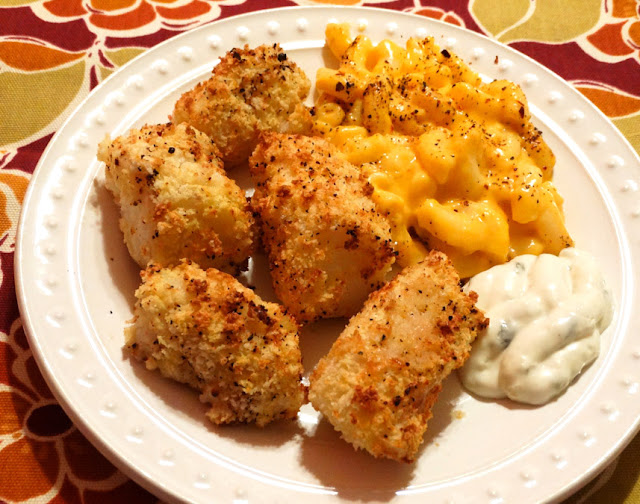 Crispy crunchy goodness with a dollop of tartar sauce!

Slice fish into 2” pieces.
Mix the eggs and milk together in a shallow bowl.
Place panko, flour and remaining ingredients in a large plastic food storage bag and combine well.
Dip fish into egg mixture.
Place fish in bag with panko and flour and shake gently to cover fish.
Place fish in fry basket and into Power Air Fryer.
Cook for 12 minutes at 350° setting, flipping once.
Or, place fish on baking sheet coated with cooking spray and bake at 400° for 10-15 minutes, until fish flakes easily and panko is golden brown.
Serve with tartar sauce
Printable recipe 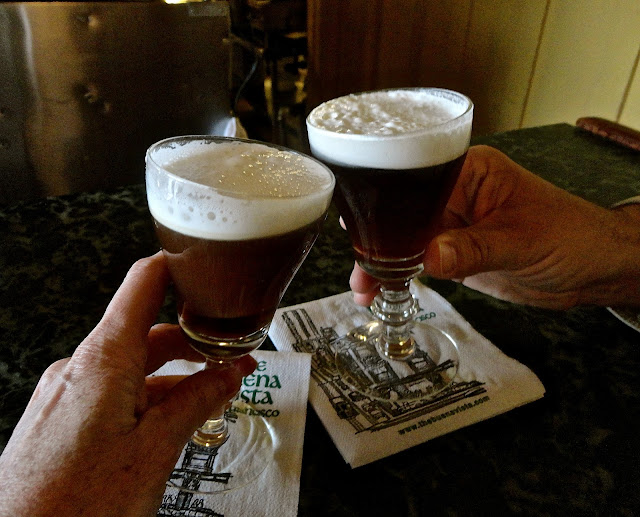 I’m of English and Dutch descent, Bill is of Swedish and German, no Irish here that we know of but that doesn’t stop us from loving that Irish coffee and the occasional green beer.


As the story goes, Irish coffee started way back in 1942, at Foynes Airbase, Country Limerick, Ireland…


On a miserable winter evening, A Pan Am flying boat landed, and a plane full of chilly passengers disembarked.  Joe Sheridan, the head chef at Foynes, concocted a drink that would warm their bodies as well as their spirits, a brew of hot coffee with a healthy splash of Irish whiskey.  A passenger asked Sheridan if they were served Brazilian coffee.  The chef told them, “No, that’s ‘Irish’ coffee!”


By 1945, the Flying Boat was ended, making way for land planes and a new airport, Shannon International Airport.  Joe took his innovative drink along, and worked there until 1952.  Today, there is a plaque honoring his creation outside the Joe Sheridan Café Bar.

Thanks to Stanton Delaplane, an international travel writer for the San Francisco Chronicle, the drink made its way to the United States and The Buena Vista Café in San Francisco.


On November 10th, in 1952, Delaplane persuaded George Freeberg, Buena Vista’s co-owner, to recreate the coffee beverage, but it didn’t work out as planned, there was a problem ~ the cream would not float.  According to legend, Mr. Delaplane, after sampling dozens of failed experiments, nearly passed out on the cable car tracks. 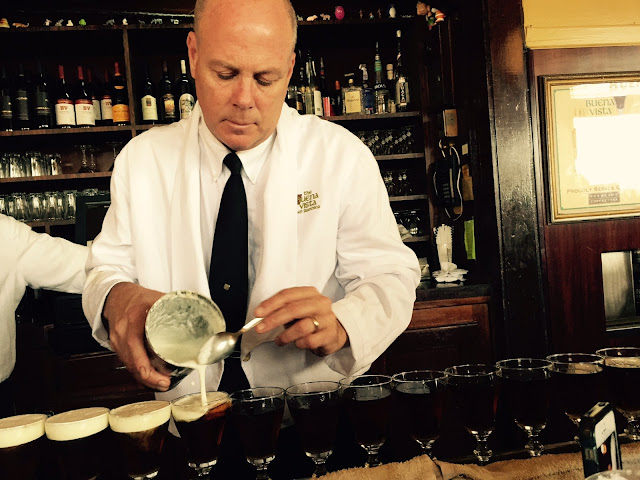 They sought help from the mayor of San Francisco, a dairy farmer, who informed them that they should age the cream for 48 hours and froth it --- then, it would float as daintily as a swan on top of the coffee.  Voila!

Deleplane mentioned the drink numerous times in his travel column, which was read across the United States, popularizing it.  Success was theirs! 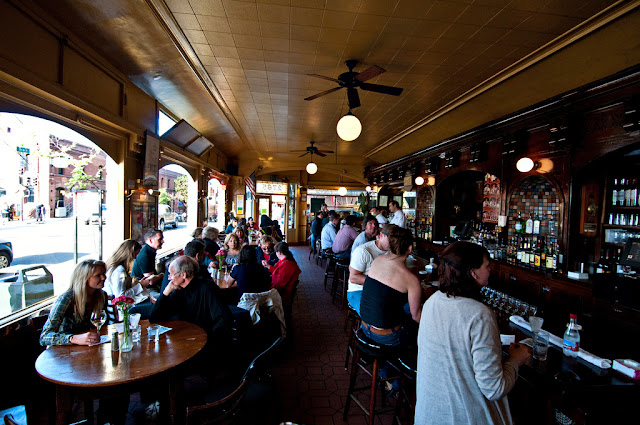 And that’s a fact, delightful, for sure!  A charming little café, with atmosphere and an outstanding Irish coffee!

It serves up 2,000 to 3,500 Irish Coffee’s a day - until the bartender's white jacket sleeves are spattered with coffee and the century-old tavern closes at 2:00 a.m.

Veteran bartender, Jack Nolan, with 37 years service, and his brother, Larry, who has been lining up glasses at the Buena Vista for 40 years, estimate they've served up over 3 million Irish coffees over the years...


Pre-heat a 6-ounce heatproof glass by filling with hot water.
Add 2 sugar cubes to the glass, then pour over coffee until the glass is ¾ full.
Stir thoroughly until the sugar is dissolved.
Add 1 1/3 ounces of whiskey to the coffee.
Float a layer of whipped cream over the top of the coffee by pouring gently over a spoon.
Printable recipe

I think I did leave my heart in San Francisco more than once, and wish Bill and I were there now sipping on an Irish coffee at the Buena Vista... 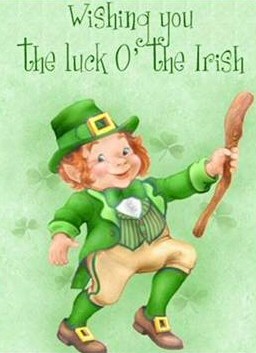 
I decided many years ago,
there was a special place
in hell reserved for
Brussels sprouts!

They’ve have been around forever, they’re almost older than dirt…

Along with cabbage, broccoli, cauliflower, and kohlrabi, they were all cultivated from the same prehistoric plant between 8,000 and 10,000 years ago.

After all this time, since first eating them years ago, I chose to try the sprouts again.  Maybe they just needed a different method of cooking ~  like being roasted instead of boiled ~ a proper cooking! 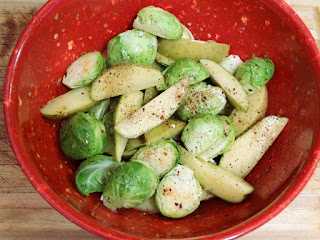 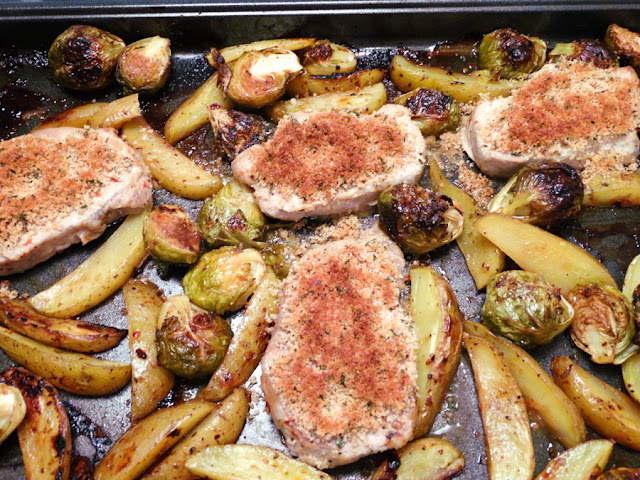 What developed was a good sweet roasted flavor, they tasted pretty good this go around, especially along side the chops and potatoes!

The secret for these pork chops is in the Italian salad dressing marinade.   Using the shortcut marinade in this recipe, the meat turned out tender and delicious on the inside.

On the outside, the crumb coating delivered a good crunch, almost like the breaded chops Grandma used to make. This is a perfect comfy dinner for a snowy day…

Our winter here in Cary, has been a bit weird this year!  Warmer than usual, with no more than a trace of snow in January and February.
This morning we have 4” snow on the ground, more on the way tomorrow.

Spring is just around the corner…

I considered this home cooker for a long time before buying
yet another small appliance that would
just take up space and collect dust.
Now I wish I hadn’t waited so long
as it turned out to be a great purchase! 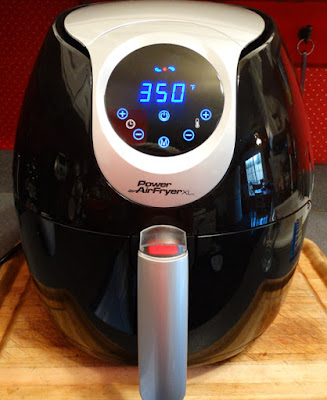 It’s a 5 quart Power Air Fryer XL.  Using no oil or only a tablespoon or two of oil when cooking foods, this great home cooker lets you bake, steam, grill, sauté or fry your favorite foods, without the guilt.

It probably resembles a convection oven, more than a deep fryer.  It cooks quickly, it’s easy to use and clean-up is a breeze. 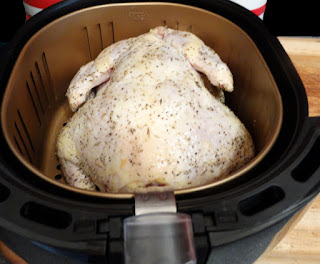 The best part was the delicious taste of the chicken it roasted, with its even, crispy crust on the outside, and its moist and tender meat on the inside. The heap of seasonings ~ rosemary and thyme, garlic and onion powders, was simple and perfect for flavoring up the chicken.

Most of us like chicken and it goes well with about anything on the side, the price is right and it smells mouth-watering as it cooks.

We were very impressed with the end result of the chicken, and I know this small appliance is a keeper, as is the recipe! 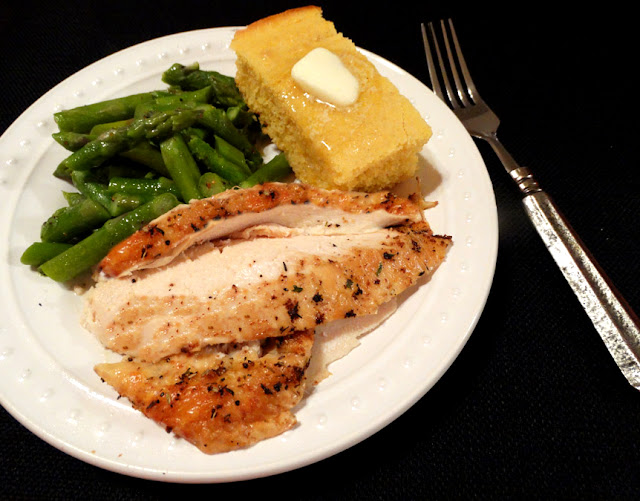 It was a delectable chicken and I’m really looking forward to a chicken sandwich with a dab of mayo for lunch today!

Coat the chicken with olive oil.
In a small bowl, combine the 6 seasonings and rub over chicken.
Let sit at room temperature for 45 minutes before cooking.
Place chicken breast side down in the Air Fryer basket.
Press Power button and set cooking time to 20 minutes at 360°.
When cooking time expires, turn the chicken over and repeat cooking time and temperature.
At end of cooking time, thermometer inserted into chicken should register 165°.
Let chicken rest for 10-15 minutes.
Serve
Printable recipe

Disclaimer:  The opinions here are my own, no compensation for products.