Ring in the New Year with a French 75!


Even though it may sound like a dainty little drink, this potent marriage of gin and bubbly is name after a giant gun ~ the French 75mm gun  ~ used in the First World War.  Evidently the cocktail was rumored to have such a kick that it felt like being shelled with the powerful field gun right in the gut.

Simply named 75 (Soixante Quinze in French), the original recipe differed slightly in that it was served over cracked ice in a tall glass, similar to a Tom Collins, with champagne replacing the soda.


An early form of the French 75 was created in 1915 at the New York Bar in Paris.  Years later in 1942, it was popularized in America at the Stork Club in New York City, and appeared in the cult classic movie “Casablanca” that same year.   It is referenced twice in the John Wayne films A Man Betrayed (1941) and Jet Pilot (1957.)


Combine gin with fresh lemon juice, simple syrup, champagne, and cracked ice; shake and strain into a champagne flute, top with champagne, add a lemon twist for garnish, and… 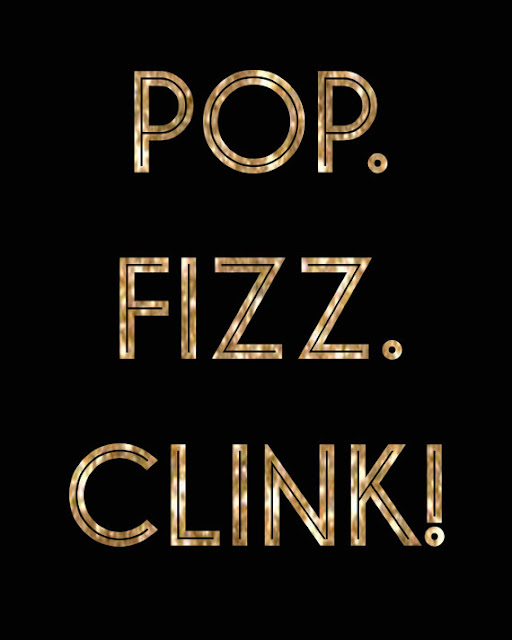 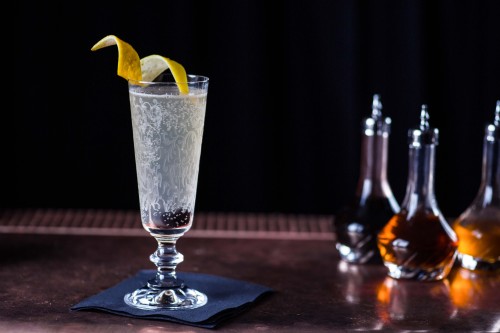 Ring in 2018 with this classy cocktail!

A potent marriage of dry gin and bubbly.

Have a safe
&
Happy New Year!

Have a Very Merry Christmas!


of hope and love.


to you and yours!

Email ThisBlogThis!Share to TwitterShare to FacebookShare to Pinterest
Labels: Christmas

From the time Billy and Matt were little boys, this was the cookie they had to have every Christmas, not only for them to eat, but for Santa to enjoy with his glass of milk on Christmas Eve.

I had no problem baking them; however, there was a catch:  they had to help with the decorating.  Cookie decorating is definitely not my thing.  I use cookie cutters rarely and forget piping bags, I have no patience for them at all.

Santa's, angels, snowmen, candy canes, reindeer, stars, Christmas trees and bells covered the table  ~ plenty of cookies to keep them busy decorating for a good while on a wintry afternoon.  I mixed icing with red and green food coloring, handed them each a knife and we decorated away.  Colored sugar was scattered everywhere, they did a great job, and what a fun mess we made!

Sadly, those days are long gone, and now this is my go to cut-out cookie recipe.  These cookies are easy to make, although the dough needs to refrigerate for an hour.  Easy to make, delicious to eat, just not so pretty to look at now that I do all the decorating myself...

Cream cheese is the little secret ingredient here that makes these cut-out cookies easy to handle and adds a little tang to complement the sweetness. 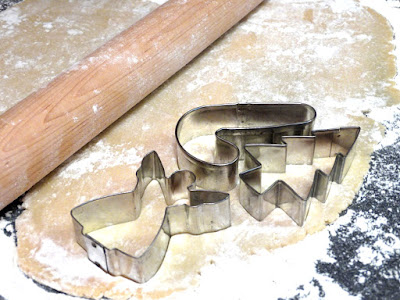 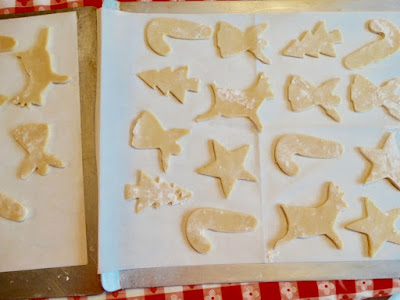 I like them rolled out on the thin side and nice and crisp, with just a very slight touch of golden color on the bottom and sides when they come out of the oven.  If you roll them out thicker, they have a softer cookie texture.

So ~ turn on your favorite Christmas tunes and bake and decorate to your hearts content!

The aroma is wonderful as they bake...

Method for the dough:
Beat butter and cream cheese with an electric mixer on medium speed.
Add half of flour, then sugar, egg, salt and extracts.
Beat on low speed until combined.
Beat in the remaining flour on low speed.
Divide dough in half, cover and refrigerate for 1 hour.
Preheat oven to 325 degrees.
Line baking sheets with parchment paper.
Roll out dough on lightly floured surface to ¼” thick.
Cut out shapes with cookie cutters.
Arrange on baking sheets.
Bake for about 12 to 15 minutes or until edges are slightly golden.
Transfer to write rack and cool completely.

Method for the icing:
Beat together sugar, butter and cream cheese in small bowl.
Add extracts.
Stir in milk, 1 teaspoon at a time, until icing is of spreading consistency.
Add food coloring if desired.
Decorate cookies with icing and sprinkles.
Makes about 2 dozen

I love coconut—
the more,
the better! 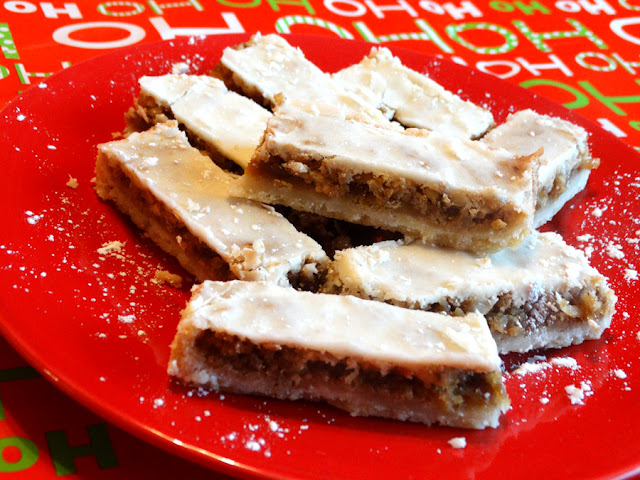 A sweet coconut filling layered on a buttery shortbread crust, spread over all, a tangy orange-lemon frosting…

This is a simple bar to make for any coconut lover, and is one of the best treats for this time of year that I can think of. 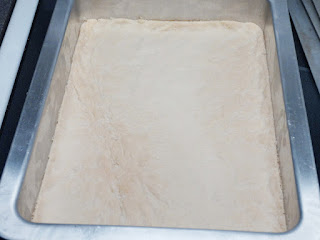 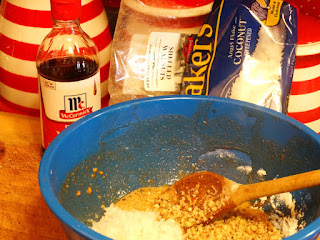 They're simple, easy to make, chewy, nice and sweet, and loaded with coconut.

If you have a yen for coconut, you can’t go wrong making these!


I am of Dutch heritage and
thank them for more than
windmills and tulips! 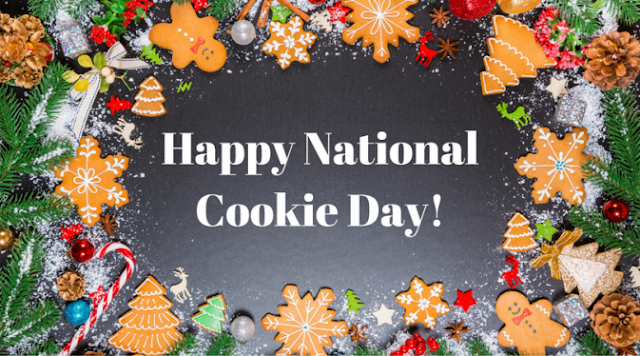 Dutch bakers used to test oven temperatures on small amounts of batter so that they wound not waste the entire cake mix if the temperature wasn't right.  It wasn't long before they discovered that these tiny pieces of cooked batter were actually quite tasty.

Modern Christmas cookies can trace their history to recipes from Medieval Europe biscuits ~ when many of the ingredients we use now, such as ginger, black pepper, cinnamon, almonds and dried fruit were introduced into the west.

By the 16th century, Christmas biscuits were popular across Europe.  Not until the 17th century, when the Dutch brought them here, did we see the early examples of Christmas cookies in the United States.  Gingerbread cookies were among the popular early American cookies.

I for one, am thrilled this practice carried on, as cookies are my favorite sweet treat!

Then in 1987, Matt Nader of the Blue Chip Cookie Company out of San Francisco created Cookie Day, celebrating it on today, December 4th.

I’ve made thumbprint cookies for many years, and was intrigued when I came across this recipe in the Chicago Tribune for Brown Butter Thumbprints. 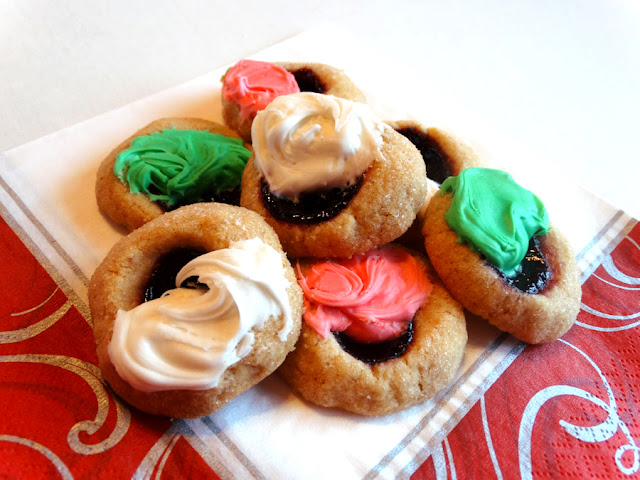 I love that the usual thumbprints are kicked up a notch by using browned butter.  Browning butter adds a new dimension to an already good kitchen staple.  It’s an easy way to change-up a recipe. And the aroma as they’re baking, is magnificent.

Browned butter gives the cookie a nutty caramel flavor that is a perfect complement to blackberry jam.  Choose the jam of your liking, we like blackberry, apricot or is fine also. 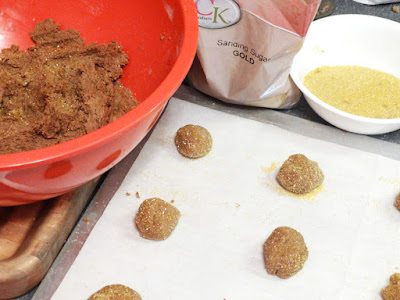 A little cardamom goes a long way; I added one-half teaspoon to the mix; however, if cardamom is new to you, go easy with it, and use a little less for a background note.  It has a distinctive, spicy flavor, maybe a little citrusy, I think it’s great in baked goods and learned about baking with it many years ago from my Swedish MIL.

Allow for additional time when making these, as the butter will have to freeze for a short time.  Then, later, the cookies will have to be refrigerated for a while before baking.

Give this one a go, bet you'll really like it! 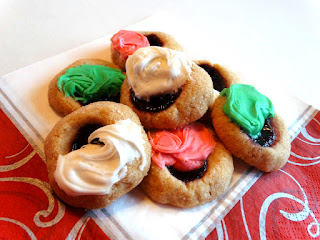 Line 2 baking sheets with parchment paper.
Melt butter in a small skillet or saucepan over medium heat.
Cook, swirling the pan, until brown flecks appear and the butter smells nutty, about 7 minutes.
Pour into a heatproof bowl.
Freeze, stirring occasionally, until the butter is spreadable, about 35 to 40 minutes.
Meanwhile, whisk flour, baking powder, cardamom and salt in a medium bowl, set aside.
Beat the browned butter and ½ cup sugar in a large bowl with a mixer on medium-high speed until light and fluffy, about 3 minutes.
Beat in the egg until combined.
Reduce the mixer speed until the dough comes together.
Roll dough into 1” balls, then roll in the remaining ¼ cup sugar, or gold sanding sugar.
Arrange about 1½” apart on the prepared baking sheets.
Using the tip of your thumb, make a small indentation in the center of each cookie, without going through bottom of dough; pinching together any large cracks.
Refrigerate until firm, 20 to 30 minutes.
While refrigerating:
Preheat oven to 375°.
Fill each indentation with ½ to 1 teaspoons jam.
Bake until cookies are set and lightly browned on the bottom, about 25 minutes.
Let cool completely on the baking sheets for 10 minutes before carefully transferring to wire racks.
Decorate with frosting, if desired.  Add a drop of red or green food coloring to white frosting, if you like variety.


This recipe appears here every Thanksgiving,
because
it's delicious! 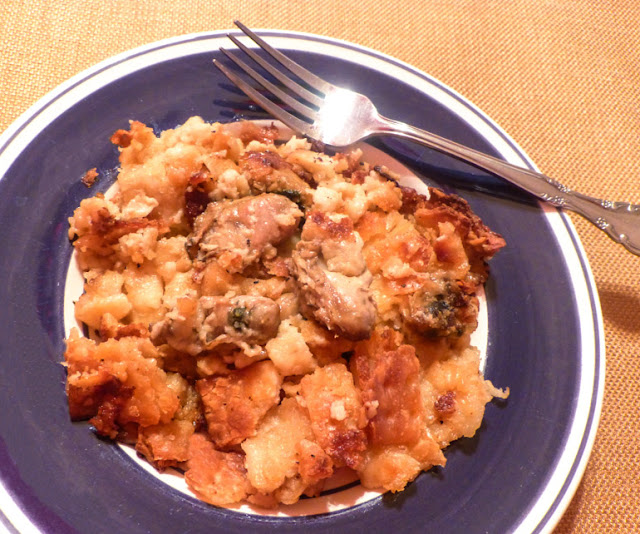 If you love oysters, this is the way to go:  oysters, oyster liquor, Club Crackers, BUTTER, half and half, and salt and pepper.  Needs no more, no less.

This is always a hit at Thanksgiving and disappears as quick as a flash! 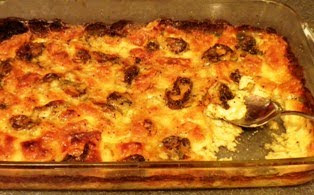 As I’ve said before, when Mom made this every Thanksgiving and Christmas, we called it oyster dressing.  Technically, it’s probably scalloped oysters…

Anyway, sadly, it doesn’t make a pretty picture, but it’s the perfect side on the Thanksgiving table, “oyster dressing!”

Thanksgiving dinner is not complete until this dish is on the table! Use butter, use half and half!
prep time: 15 MINScook time: 45 MINStotal time: 60 mins

Email ThisBlogThis!Share to TwitterShare to FacebookShare to Pinterest
Labels: Butter, Club crackers, Dressing, Half and half, Holidays/celebrations, Oysters, Thanksgiving

Kind of funny, Bubba (the seafood lover) reminds me now and then of how, when he and Matt were growing up, I used to never like fish or any seafood except for tuna and salmon, the 2 he didn't like at all back then and still doesn't.  And of course those were the only ones I served back then, pleasing Matt.

These days, I like fish and some seafood, serving it most weeks here, with Bill tolerating salmon.

That's when I pep up salmon for Bill and I at dinner time, turning to this piquant sauce uniting blue cheese, cucumber and dill for the salmon.  It's a perfect combo!

There's nothing bland about this little sauce which you can whip up in no time.  In my book, piquant blue cheese always puts pizzazz in a dish! 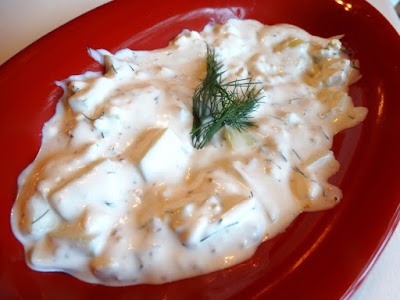 As salmon is readily available, versatile and simply delicious, the quick prep time of this recipe and its short list of ingredients, makes it an even better dish ~ perfect for a weeknight meal or company too!

Cook this for your dinner tonight:  salmon, with a zesty sauce; a little green salad, and broccoli, maybe a glass of bubbly, and Voila!  You have yourself a great tasty dinner! 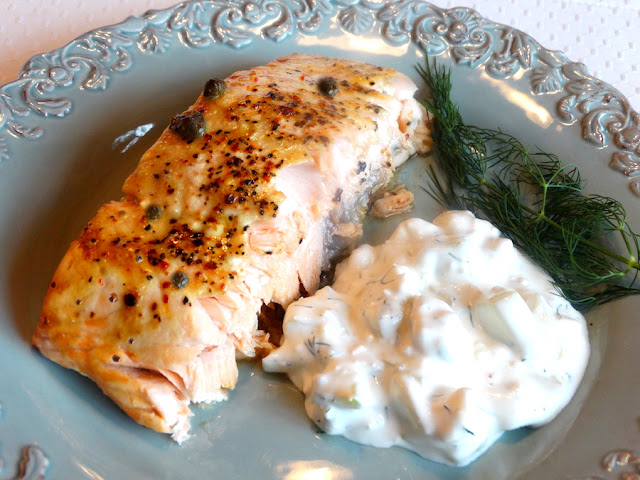 By the way, the sauce makes a great salad dressing for a wedge of iceberg lettuce.

It will make you wonder why you ever ate kale salad, for sure!

This piquant sauce will jazz up your salmon deliciously!

For the blue cheese, cucumber and dill sauce: