Growing up, my parents and brother were crazy about fruit; there was never a shortage of it in the kitchen, with Mom dishing it out every chance she got.

Then Bill and I married…  Two sons, a grandson, and many years later, fruit lovers still rule in my family.

And I still don’t get it…

Am I alone in this?  Maybe I’m missing out on Mother Nature’s bounty, but I could never eat another piece of fruit for the rest of my life and be OK with it!


With the exception of the very few fruits I do enjoy occasionally (rarely):  grapefruit, cherries and pineapple, blueberries and blackberries, plus apple pie and banana bread.  The first 2 are why I love this fruit salad! 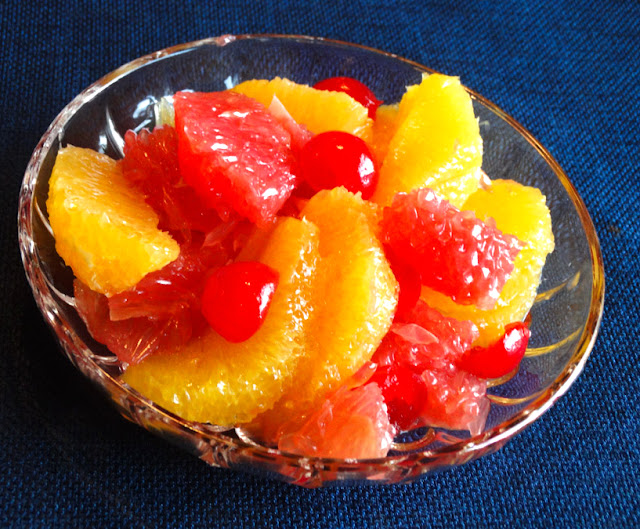 If there's no pie, a simple fruit salad can be the perfect ending to your dinner, maybe more appropriate than an elaborate combination.

Ruby red grapefruit tastes great with it’s tart and tangy flavor, it’s higher in some nutrients, such as Vitamins A and C, than white grapefruit, making it the better choice for us grapefruit lovers.

Navel oranges, the “winter” orange, have a lack of seeds, easy to peel skin, and juicy flesh.  The orange grows a second “twin” fruit opposite its stem.  The second fruit is underdeveloped, but from the outside, it looks like a human navel, hence the name.

Peeling and segmenting grapefruits and oranges is a breeze, here’s the method I’ve been using for years.  If you’ve never tried it, give it a try, it’s easy peasy!

And who doesn’t like maraschino cherries!  The cherries are preserved, sweetened cherries, typically made from light-colored sweet cherries such as Royal Ann or Rainier varieties.

They’re the “cocktail cherry” in many cocktails, or used as a garnish on foods ranging from fruit salads to baked ham, to ice cream sundaes and pastries, with no pineapple upside-down cake being complete without maraschino cherries.

Toss it all together with a light dressing of honey and lime juice with a touch of strong, spicy, citrusy, aromatic cardamom for added flavor.

Peel the grapefruit.
Place a sieve over a medium bowl.
Hold a grapefruit over the bowl, and using a paring knife, cut along the membrane on both sides of each segment.
Free the segments and let them fall into the sieve.
Repeat with remaining grapefruit and oranges.
Place the fruit segments in a salad bowl.
In a small bowl, whisk together cardamom, vinegar, honey and lime juice, taste and adjust seasoning if needed.
Pour over fruit.
Add sliced cherries and toss lightly.
4-6 servings


Thought you knew
all there is to know about pork? 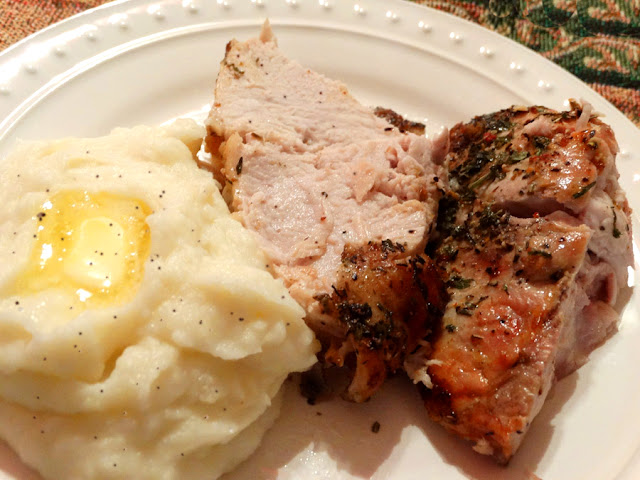 *  Throughout history, pork has been the most widely eaten meat in the world, and still is today.

*  We evidently can’t get enough of bacon, since a third of pork consumed is via bacon.  No surprise there!


*  Most food folklore suggests that New Year’s feasts should include pork and sauerkraut to ensure good luck in the coming year.  We concur!

*  Cincinnati, Ohio celebrates its pork slaughterhouse heritage with the “Flying Pig” marathon each May.

*  Around 20% of pork is made up of protein, making it an important muscle building meat.

*  The average person will eat 28 pigs in their lifetime.

*  The first recorded recipe for a pork pie was 1390 in the kitchen of the Court of King Richard and today’s pork pie is still a direct descendant of the medieval pie tradition.

*  Scientists believe that pigs are one of the most intelligent animals, ranking close behind apes and dolphins.

*  Pigs are truly a clean animal.  They don’t have sweat glands and pale pigs sunburn; hence, they roll in mud to keep themselves cool.  I grew up on a farm and saw my share of pigs rolling in the mud.

*  The word “barbecue” derived from French-speaking pirates, who called this Caribbean pork feast “de barbecue et queue,” which translates “from beard to tail.”  In other words, the pig roast reflected the fact that the hog was an eminently versatile animal that could be consumed from head to toe.

*  The word “earmark” which we now use to mean 'to designate’ or ‘to set aside for a particular purpose’, actually has a very simple origin:  for centuries, farmers marked their livestock with distinctive notches in the animals’ ears.  Earmark in the figurative sense, 'to designate' arose in the last 19th century.

And if all that’s not enough, who could’ve imagined this:

*  There are approximately 80 people in the United States listed on whitepages.com with the last name ‘Pork.’  I don’t know one of them, do you? 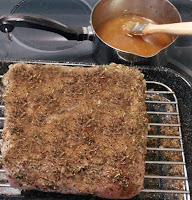 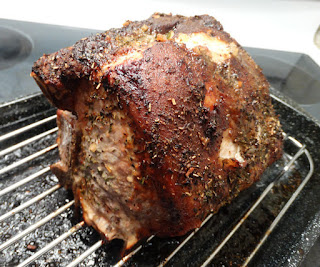 What I do know is that a good pork roast will never let you down, especially when it’s rubbed with herbs and then basted with a tangy sauce while roasting; it’s equally delicious cooked on the grill as in the oven.

This seasoned pork loin roast is affordable, elegant and perfect for your dinner, and any time you want to feed your guests well.

Bill and I were amazed how delicious it was.

Preheat oven to 350°.
Rub outside of the roast with oil.
Mix remaining ingredients in a small bowl and liberally season all sides of the roast.
Place the roast on a rack on top of a roasting pan.
Bake, uncovered, 2 to 2½ hours, until thermometer registers 155°.
Meanwhile, in a large saucepan, combine the basting ingredients.
Bring to a boil, reduce heat, and simmer, uncovered, for 10 minutes.
Brush over roast occassionally while baking.
Let roast stand 10 minutes before slicing.
About 18 servings

I’m a big fan of Montreal Steak Seasoning,
with the exception of the
large quantity of salt it contains;
I’d rather add salt to food separately. 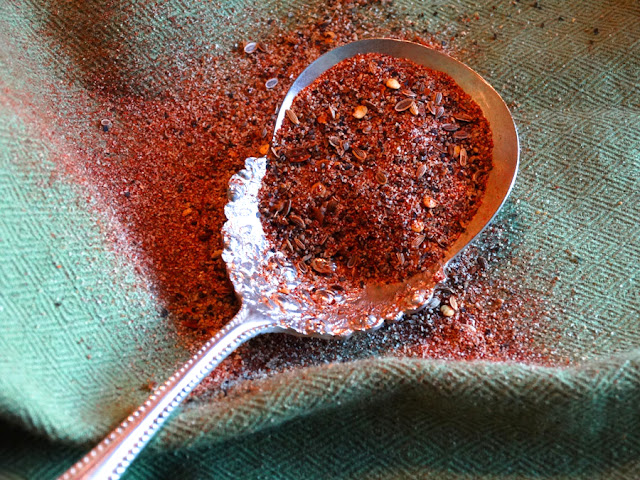 Montreal Steak Seasoning was the signature blend used by Montreal butchers to dry-brine grilled and smoked meats.  Its flavor is similar to Easter European pickling spices, and is at its best when sprinkled on beef; however, it’s the perfect seasoning to perk up other meats, seafood, plus vegetables, and stews.

There are a ton of versions of this seasoning, that works well as a dry rub also. You could substitute smoked paprika, thyme, or rosemary, the possibilities are endless.  It’s super easy to make, especially in a Ninja processor. 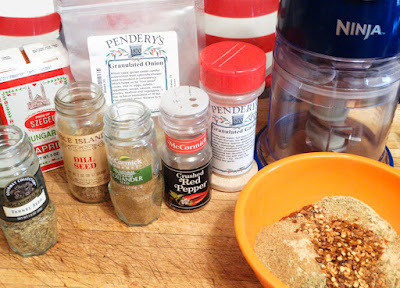 By the way, if you’ve never used the Ninja Master Prep, you should go for it.  It can perform every function of a food processor, and more, in a flash, just like a Ninja warrior would.  I use it for everything…  from chopping ice to blending smoothies, shredding meat, to chopping veggies for salsa. 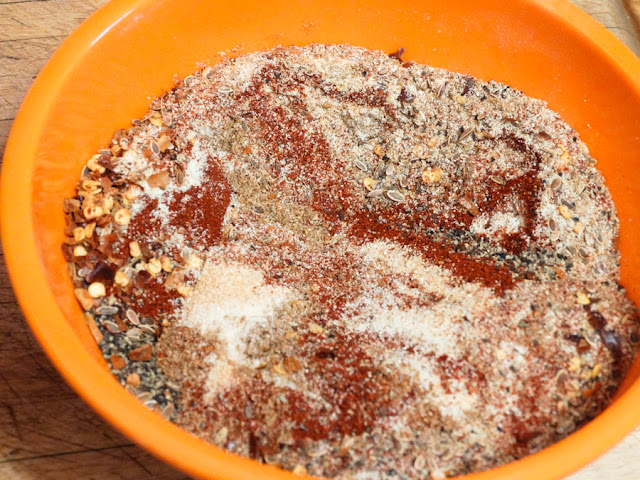 I’ve had more than my share of expensive food processors and threw them all to the curb after Bubba introduced to the Ninja!

The price is right, cleanup is a snap, it takes up little space. It’s powerful, more than words can say! 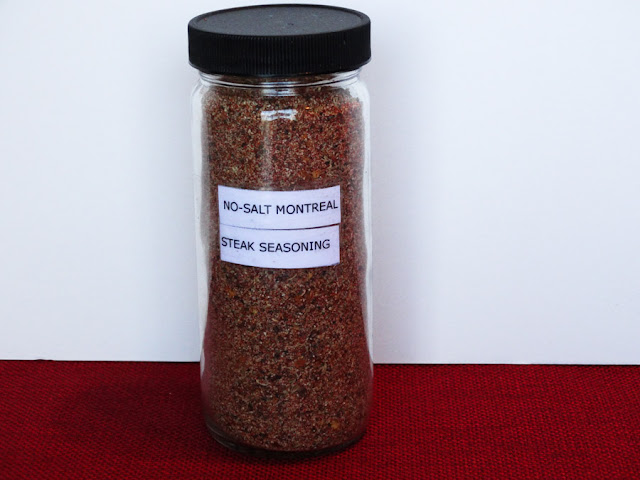 And this No-Salt Montreal Steak Seasoning is powerful also ~  about as close to the real thing as you can get!
Give it a try!

Combine all ingredients, mix well, crush slightly, using mortar and pestle or pulse once or twice in a food processor.
Store at room temperature, tightly capped in an airtight container away from heat and light.
Keeps for 1 year.
Printable recipe

Disclaimer:  The opinions here are my own, no compensation for products.

Have a
Happy Valentine’s Day! 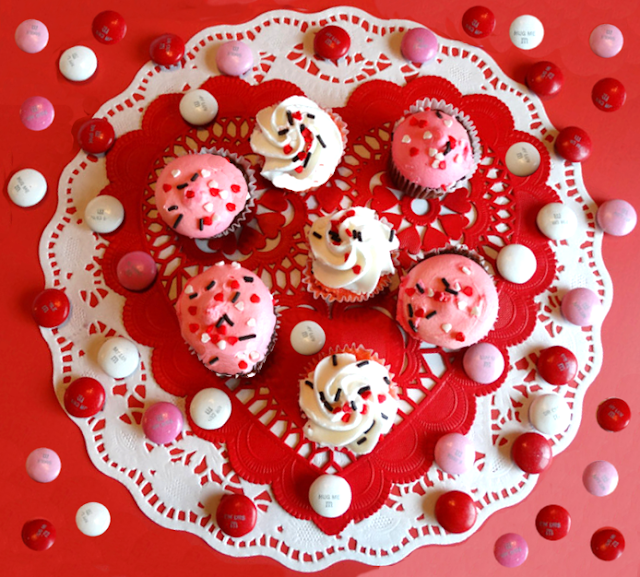 I love to bake; however, I’m admitting here I’m cupcake decorating challenged, meaning I have decorated more than my share of ill-made decorated cupcakes, cookies, you name it!

I have never gotten the hang of piping icing and envied my MIL's decorating skills when she baked innumerable wedding cakes, and so forth for others.

This is when the local supermarket comes in to play, where I can select the goodies we’d like that have that professional flair… 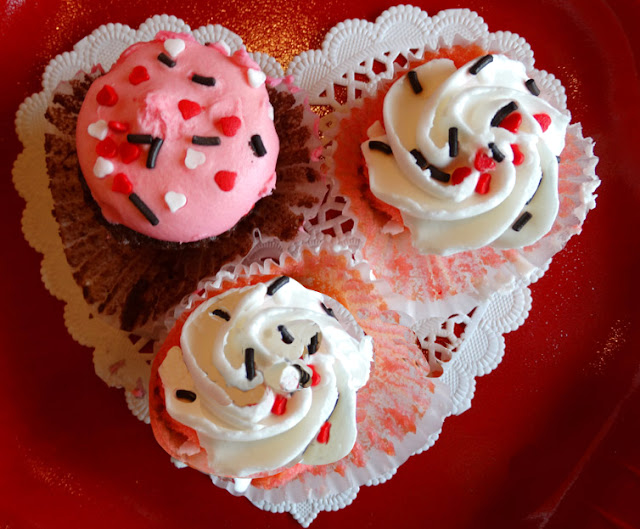 In other words,
I did not bake and decorate these cupcakes,
so no recipe today,
just Happy Valentine’s Day wishes for you all!


All the best,
Pam


This is a Midwest Classic! 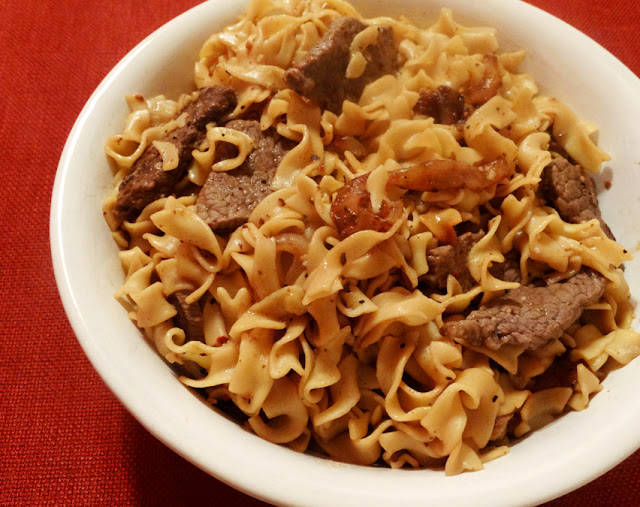 Beef and noodles fits into this category perfectly…

Most beef works well; leftover is great, steak, chuck roast, or use deli beef.  Add mushrooms, if you like, add your favorite noodle, thick or thin, and season to your taste. 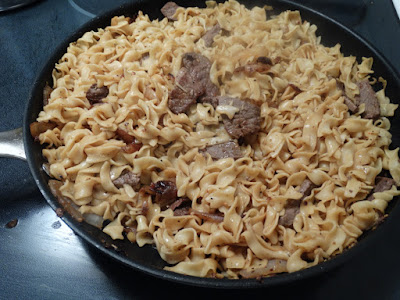 It’s winter here, it's cold and it's time for a hearty dish.

So get your fork ready and make your tummy happy!