What a way to eat your broccoli!


I’m thinking broccoli and pasta are made for each other, a great duo as this Cooking Light recipe proves. 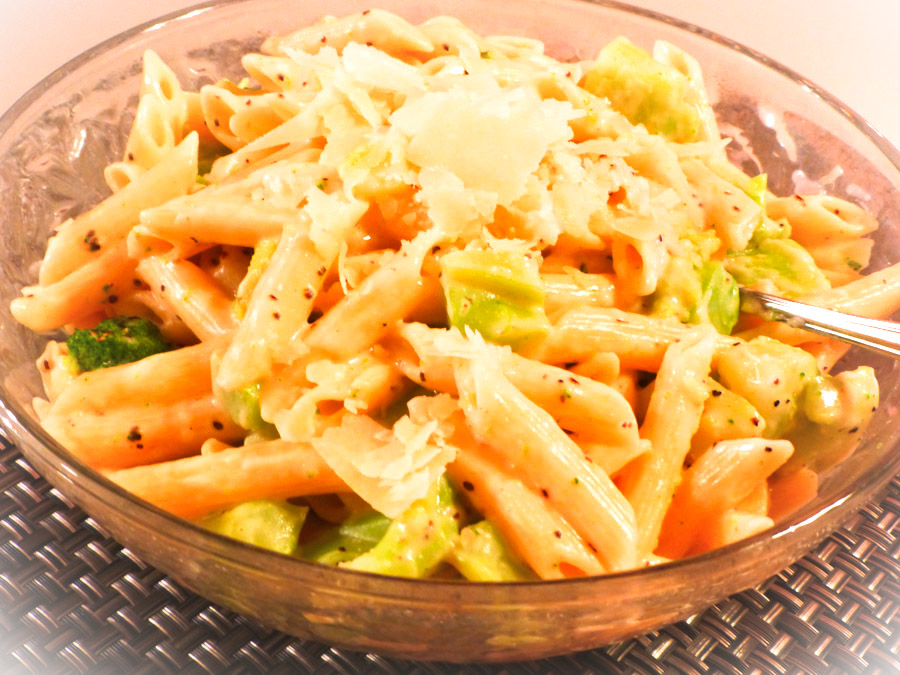 This tasty sauce is similar to an alfredo sauce but, without heavy cream and butter.  Low-fat cream cheese and skim milk are the substitutes, with Dijon mustard and seasonings flavoring it up. 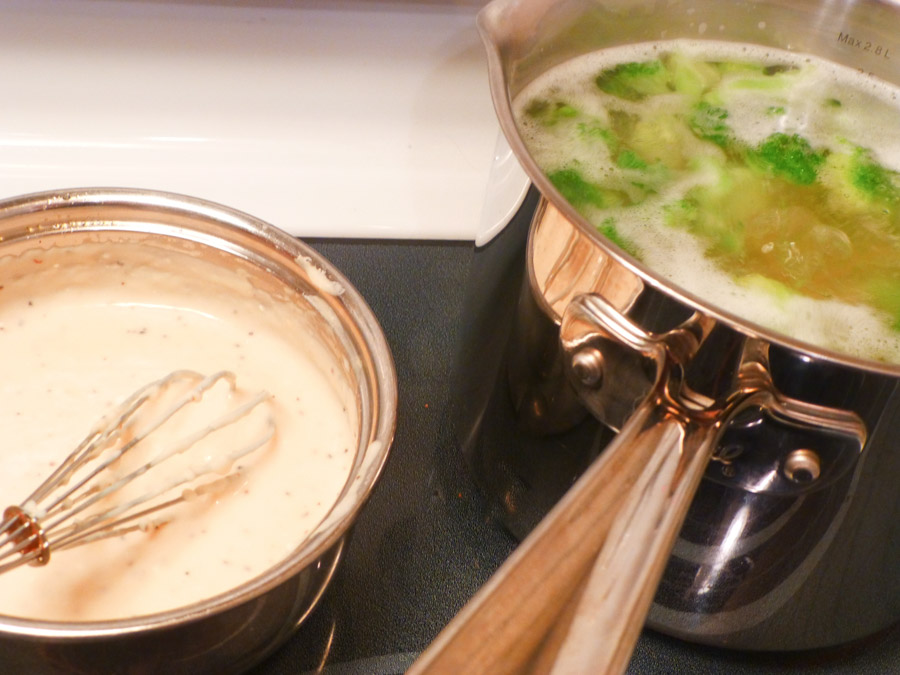 Any short pasta can be substituted here, with rotini and farfalle being good choices.  I think next time; I’ll throw some minced garlic into the mix.


Try this and enjoy your broccoli!


Cook pasta according to package directions, omitting salt and fat.
During the last 4-5 minutes, add broccoli to pan; drain well.
Place both in a large bowl.
Combine milk and flour in a saucepan over medium heat, stirring with a whisk until smooth.
Cook 5 minutes or until slightly thickened; remove from heat.
Add 2 tablespoons Parmesan and remaining ingredients, whisking until smooth.
Add cheese mixture to pasta mixture; toss.
Sprinkle with remaining Parmesan.


There’s nothing fancy about this recipe, and I’m not sure how authentic it is as far as Mexican cuisine goes ~ we just know these beef tacos are fun and taste good! 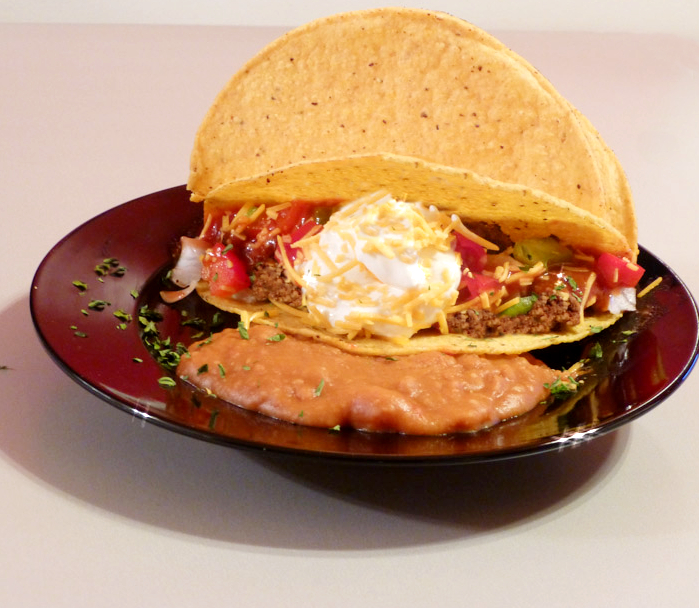 No matter what type of meat I decide to include in tacos, the cooking is especially easy due to my homemade taco seasoning recipe here.  All the seasonings for the tacos are in the jar, with no measuring of spices each time I make tacos. 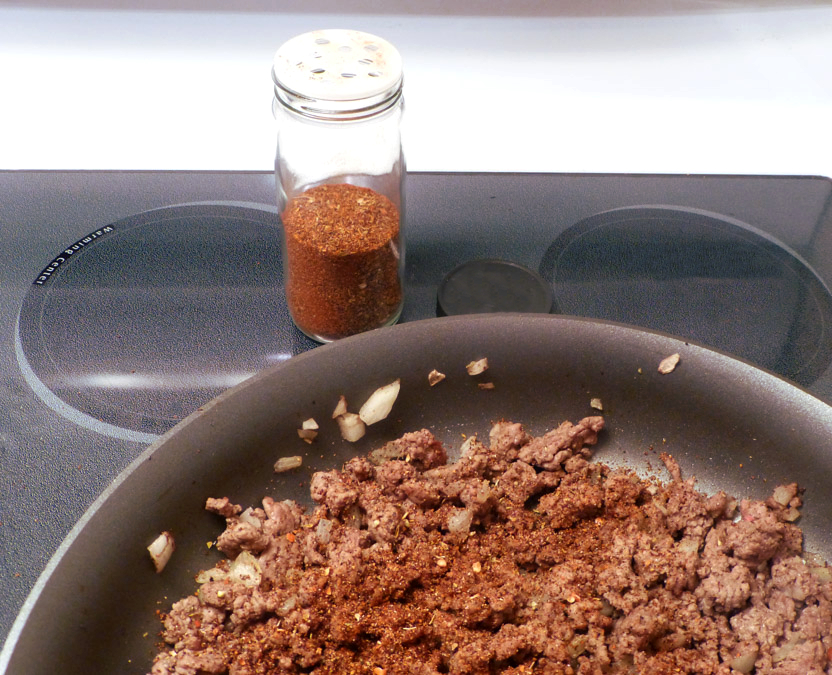 After browning the ground beef and onions, add 3-4 tablespoons of taco seasoning, and a little salt; fill the shells, add toppings, and ¡Olé!  A spicy, tasty dinner with a side of refried beans!


Brown meat and onions on medium heat in a skillet.
Add seasonings and combine well.
Transfer to a bowl.
Fill shells with meat, add toppings.
Makes about 10 tacos. 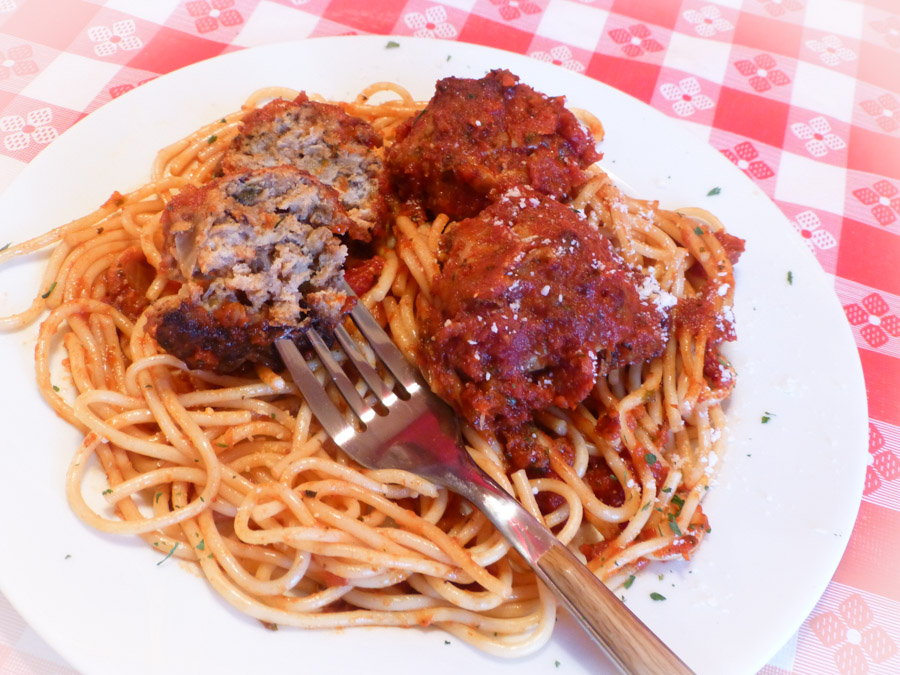 Am I the only person who doesn’t like a lot of fillers in meatballs?  It seems they always end up mushy with a mealy consistency.  I like them drier ~ firm and meaty ~ no eggs, no milk, no breadcrumbs, and definitely no Parmesan cheese.  Just several crumbled crackers for binding and a plethora of seasonings. 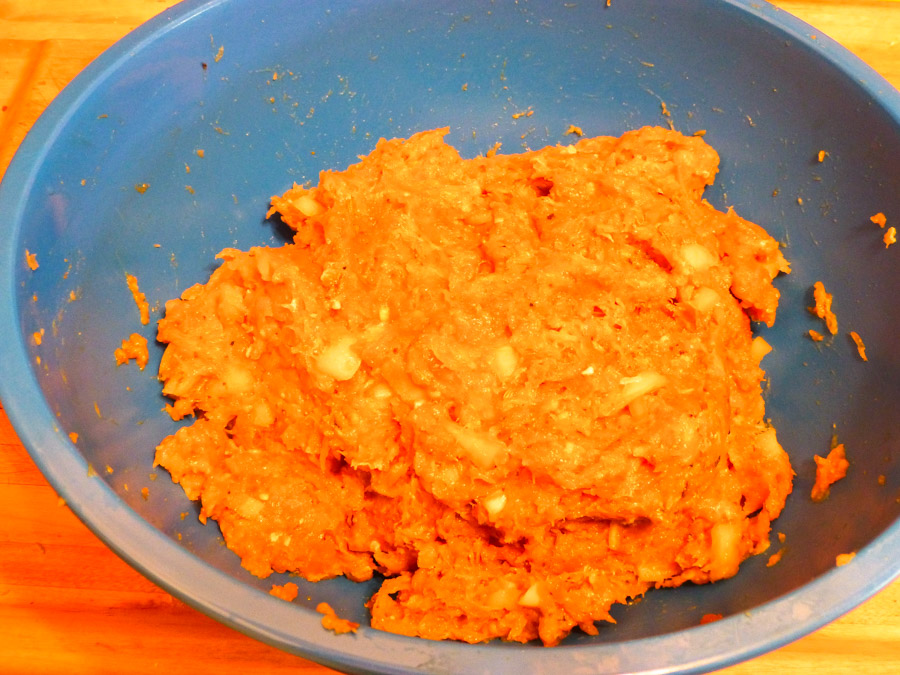 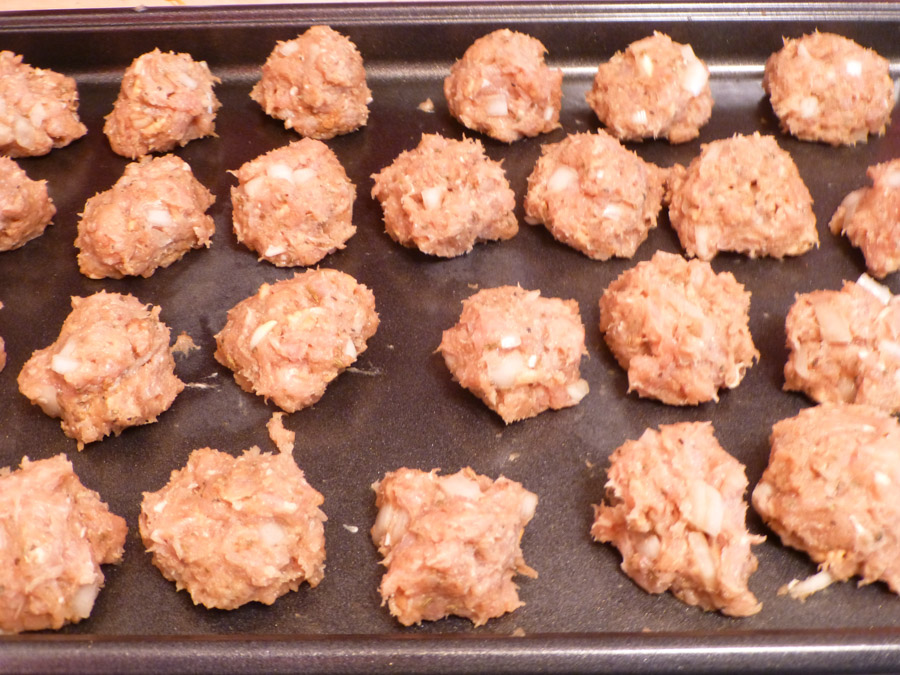 Serve these meatballs your favorite way ~ as an appetizer for dipping with blue cheese or ranch dressing, or for dinner as your main dish with pasta and sauce or mashed potatoes and a little gravy.


These chicken turkey meatballs are a real winner:  cheap, nutritious, low in fat and tasty!

Preheat oven to 350 degrees.
Mix all ingredients in a large bowl.
Form into meatballs.
Place on baking sheet.
Bake for approximately 20 minutes until golden brown.
Makes about 20 meatballs.


Bill and I were reminiscing about these fluffy warm crisp biscuits for a couple of days after eating them.  That’s how good they are! 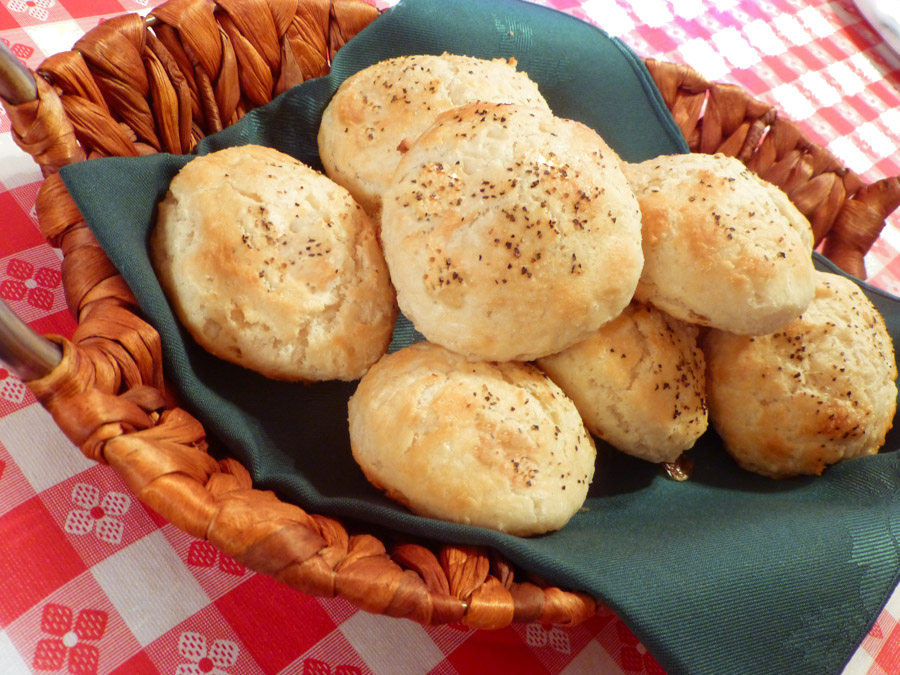 I’ve made many a biscuit over the years, and this is definitely one of the best!

It’s an Ina Garten recipe from her Make it Ahead cookbook.  In her words, “Lee Bailey was a great cookbook author and host.  He often served baking powder biscuits with dinner but I also love them for breakfast with scrambled eggs.  This is a twist on Lee’s original recipe; I’ve added flaked sea salt and coarsely ground black pepper.”


Most of the time, I follow the recipe exactly ~ but, when I don’t have half-and-half on hand, I swap one-third cup light sour cream plus 7-8 tablespoons of low-fat milk for the half-and-half, making a lighter biscuit.


I’ve found that sour cream is a great binder when making cornbread or biscuits as it minimizes crumbly baked goods.  Plus, the sour cream imparts richness and a slight tang. 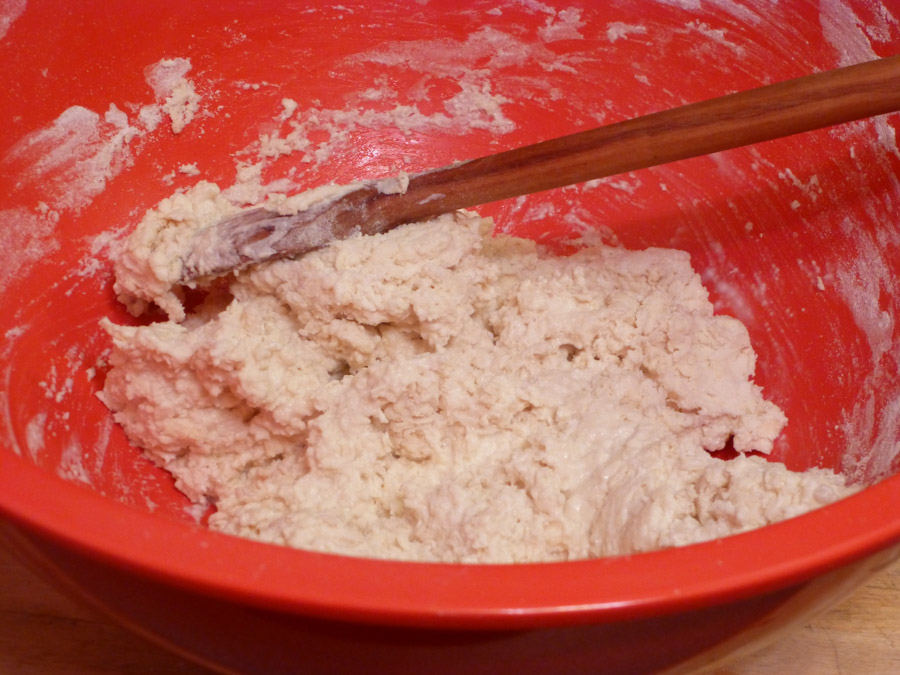 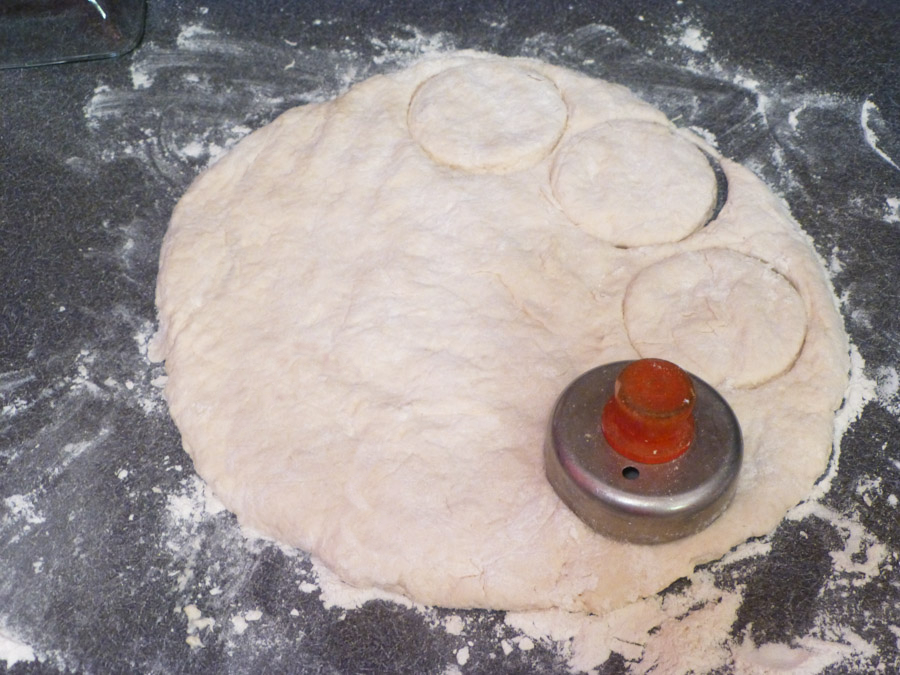 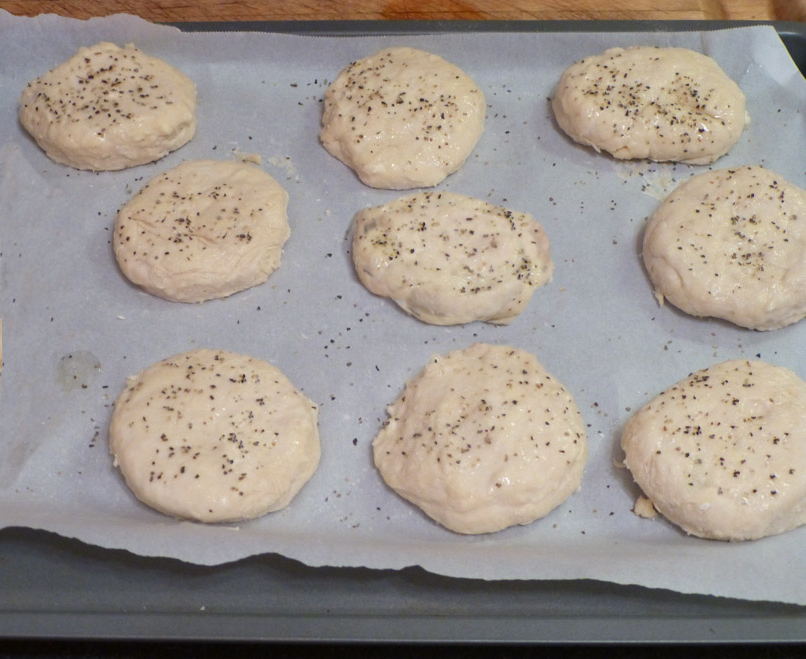 I can see them sandwiching a fried egg for breakfast!

Method:
Preheat oven to 450 degrees.
Line a sheet pan with parchment paper.
Place four, baking powder, and salt in the bowl of a food processor fitted with the steel blade and pulse to combine.
Add butter, breaking up the pieces as you put them in.
Pulse mixer about 10 times, until butter is size of large peas.
With the mixer running, pour the half-and-half down the feed tube and pulse just until mixture starts to come together.
Dump dough onto floured board and quickly knead into a ball.
Roll dough out ½” thick with a floured rolling pin.  (You should see bits of butter in the dough.)
Cut out biscuits with a 2½” round biscuit cutter and place on baking sheet.
Brush top with egg wash, sprinkle with sea salt and pepper.
Bake for 10-15 minutes, until biscuits are browned and baked through.
Allow to cool for 5 minutes and serve warm or at room temperature.
Makes 8 to 10 biscuits


The French word parfait translates to English as “perfect,” and that’s what this little dessert is ~ perfect for Valentine’s Day!

The United States version of a parfait is made by layering puddings, Jell-O, or ice cream, in a tall clear glass; topping the luscious dessert with whipped cream, fruit, and/or liqueurs. 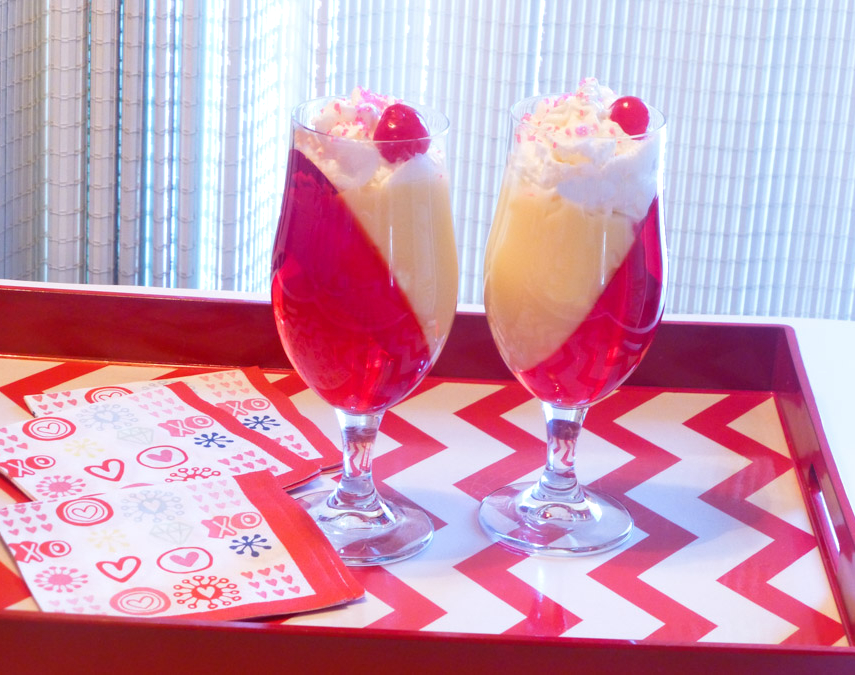 This Valentine’s Day parfait is a simple dessert layering strawberry Jell-O with vanilla pudding, topping it with whipped cream, sugar sprinkles and a cherry.  For more color, you might want to add a drop or two of red food coloring to the pudding for a red/pink parfait.


After pouring the Jell-O into glasses, place them in a container in which they can be tilted and refrigerated until set. 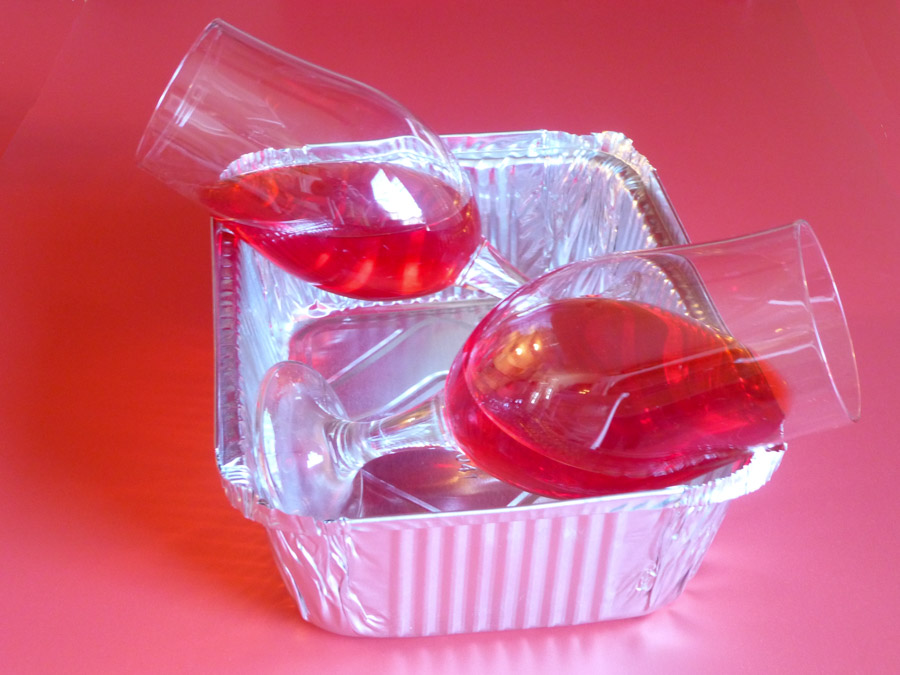 I used ale glasses for the parfaits; ending up with 2 servings, use a smaller glass if you want more servings.  For the finishing touches, squirt a dollop of Reddi-wip on top, scatter pink sugar over it, add a single bright-red maraschino cherry on top, and  ~


Voila, a perfect little dessert for you and your Valentine!


Prepare Jell-O according to package directions.
Let cool for several minutes, divide equally among parfait or dessert glasses.
Tilt glasses in a container, chill until set.
After Jell-O has set, prepare pudding according to package directions.
Chill for several minutes.
Spoon pudding into glasses.
Top evenly with a serving of Reddi-wip.
Decorate with sprinkles, top with cherry.
2-4 servings, depending upon glass size.


This dish is delicious with the sweetness of apples harmonizing with the cabbage and pork; absorbing all the good flavors. 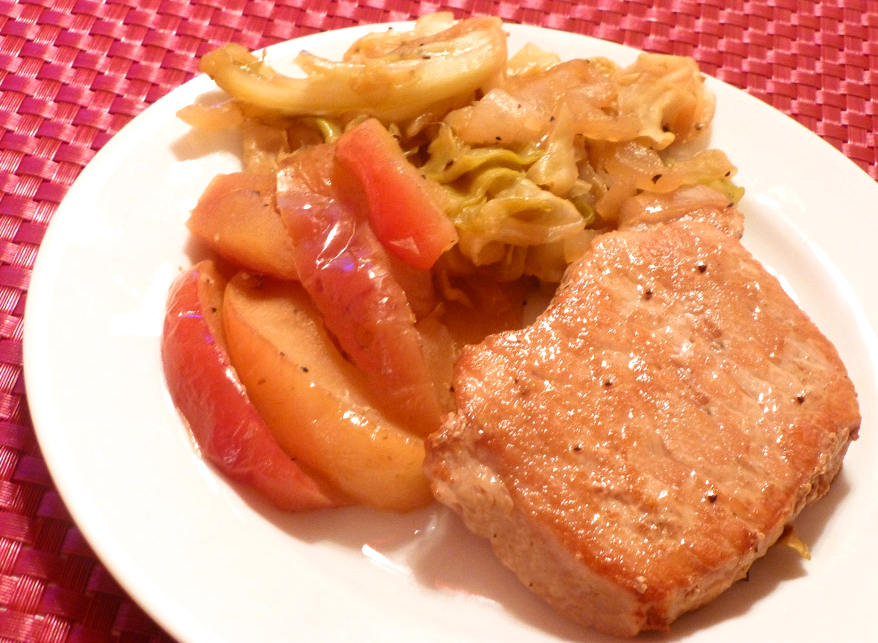 It can be a one-pot meal if that’s what you like, or after browning the chops, assemble all in a baking dish.


I prepared the pork and accompaniments in an ovenproof paella pan; cast iron would be fine too.  To avoid drying out, it may be necessary to add more stock during baking.  However, do not add too much; or, excluding the pork, all will turn to mush. 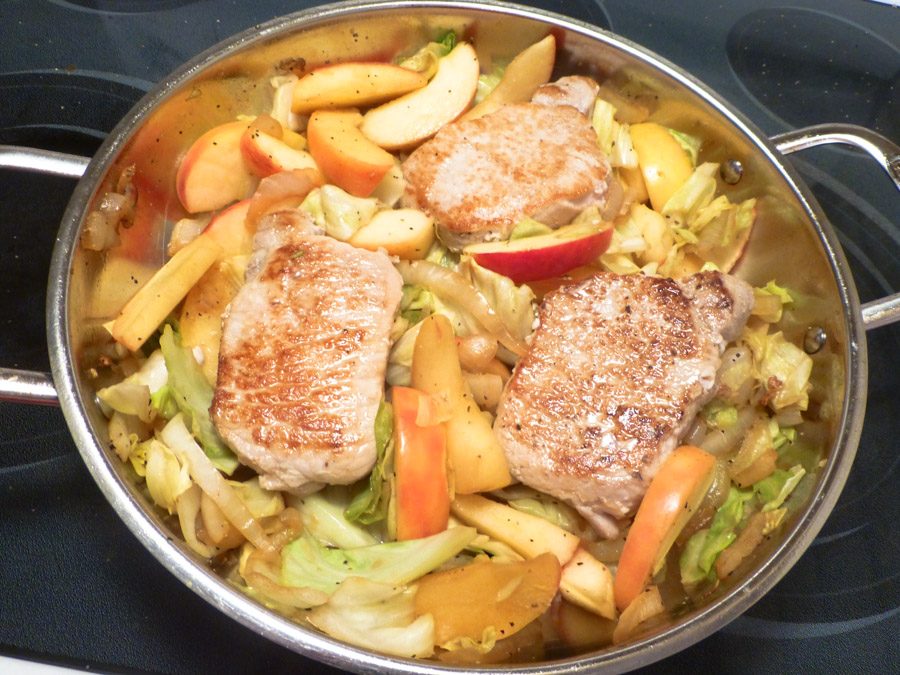 It’s a good dinner for this time of year, and I will be adding a little caraway seed the next time!


Oh, mashed potatoes on the side would be a wonderful thing!


Preheat oven to 350 degrees.
Heat a large oven-proof skillet over medium-high heat, add butter, swirling until it melts.
Add pork chops to pan and cook for 3 minutes per side, until browned.

Remove from pan and set aside.
In skillet, stir together next 5 ingredients, through pepper.
Add onion, cabbage and apples, combining well.
Return chops to skillet, cover and transfer to oven.
Roast for about 1 hour, until apples and cabbage are tender and pork has reached desired doneness.
Add more liquid, if needed, as it bakes.


I like authentic tamales, but to be honest, making them from scratch scares the heck out of me.  Enter, tamale pie, a great swap for the real thing! 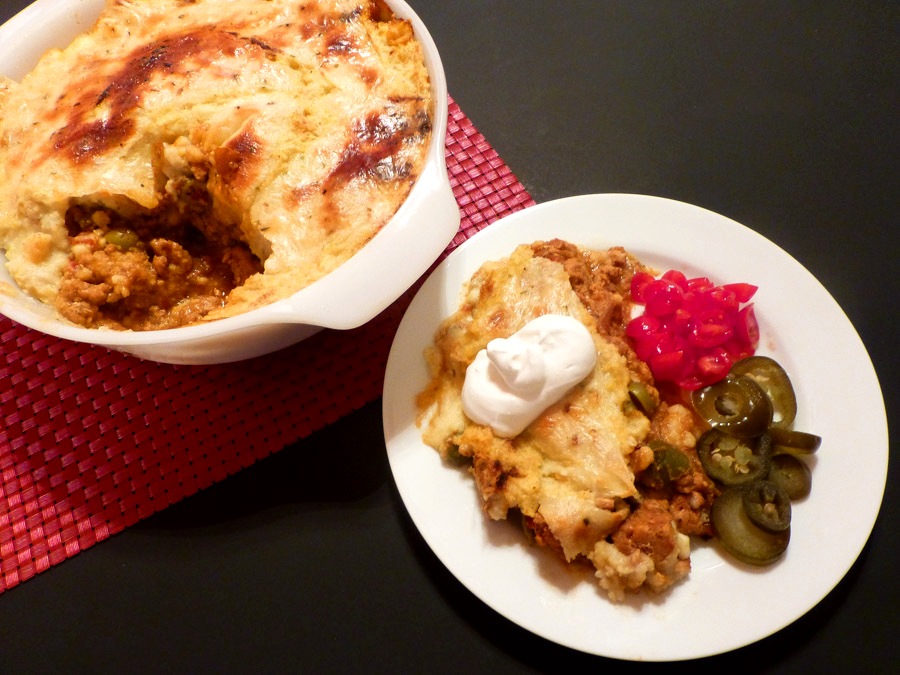 This is another recipe from Martha Stewart’s, Martha’s American Food cookbook, from The Southwest section of the cookbook.  I’ve said it before, this cookbook is on my “favorites” list.


No shredding meat, neither cornhusk wrapping, nor steaming needed here:  The casserole is layered with the flavors that make authentic tamales, a product of Mexico, so delicious, but with distinctly American ease and with beef or pork being swapped out for lean turkey. 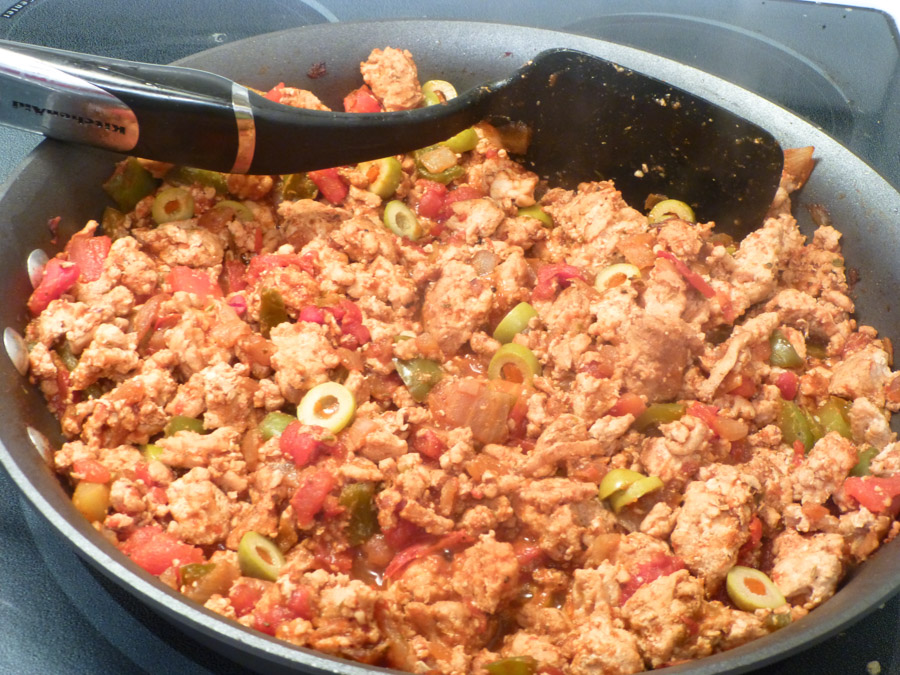 This tamale pie is a tasty example of Tex-Mex cooking that I like cooking here in the Midwest, especially in the cold weather we’re having now:  it’s all of 2 degrees out there now, wind chill –9 degrees; that's on top of the 19.8-inches of snow we had Sunday ~ won't be going to our beach today!


It’s really delicious down to the last bite ~ give it a try!


Bring water to a boil in a medium saucepan, add salt.
Whisking constantly, add cornmeal in a slow, steady stream, switching to a wooden spoon when cornmeal becomes too thick to whisk.
Reduce heat to medium, and cook, until thick and creamy, about 15 minutes.
Stir in butter, and keep warm over low heat.
Preheat oven to 350 degrees.
Coat a 2-quart baking dish with cooking spray.
Heat oil in large skillet, over medium-high.
Add onion, garlic, bell pepper, chile, and a pinch of salt.
Cook, stirring often, until onion is golden and vegetables are tender, about 10 minutes.
Add turkey, and cook, breaking into bite-size pieces, until cooked through, about 5-7 minutes.
Stir in tomatoes and juices, stock, chili powder, oregano and cayenne.
Reduce heat to medium and cook, stirring, until most of the liquid is absorbed and mixture resembles chili, about 10 minutes.
Stir in olives and season with salt and pepper.
Spread 1½ cups cornmeal into bottom of prepared dish.
Spread turkey mixture on top, then spread remaining cornmeal on top.
Sprinkle with cheese.
Bake until golden brown and cheese is melted, 35-40 minutes.
Let stand 15 minutes.
Serve with garnishes.
*I use stone-ground cornmeal for extra crunch.


The blizzard came with a vengeance, delivering 19.8” of snow from late Saturday through 1:00 a.m. this morning ~ making this the 5th heaviest snow in history for this area.  The howling winds that came with it left 4-foot snowdrifts in some spots, and only an inch of snow in a few other places. 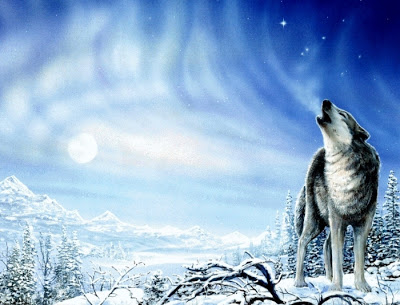 Thankfully, New England’s win made it all better and a great diversion!


On with the slow cooker ~ if you like tender pork, mushrooms and an easy dish to make for dinner, this recipe may be just right for you.

I like all mushrooms, especially the full flavor of cremini mushrooms.  Cremini mushrooms are dark brown with a slightly firmer texture than the everyday button variety.  So I knew when I saw this recipe in my Southern Living Slow-Cooker Cookbook, that it was a must try. 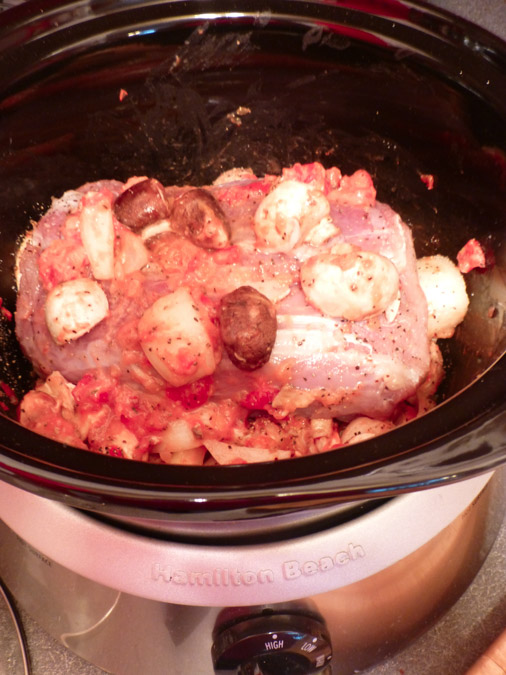 Serve it with hot cooked egg noodles, or mashed potatoes, to round out your easy meal. 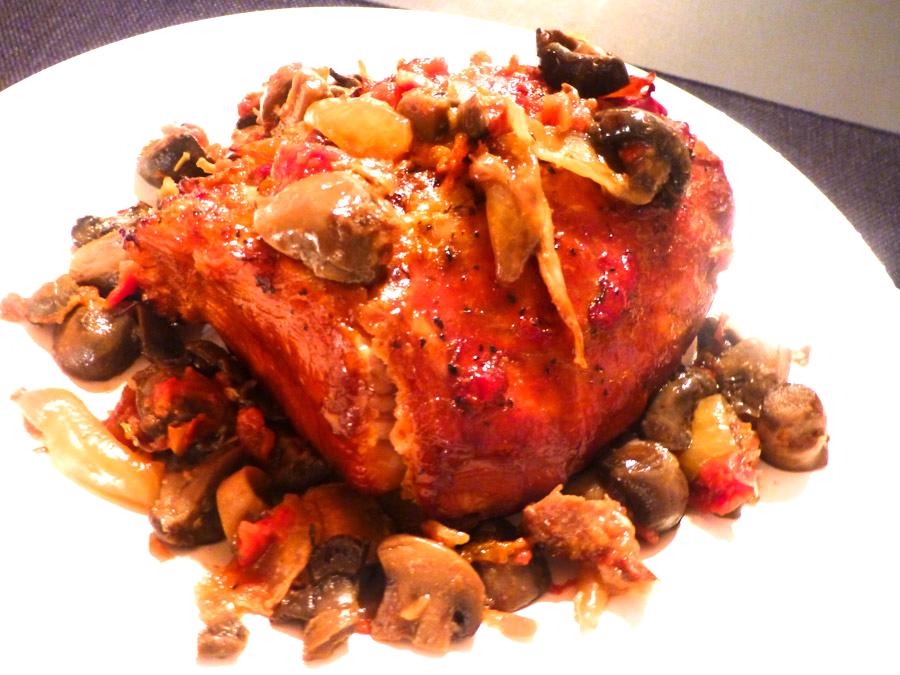 When all was eaten and done, I thought it was good, whereas Bill liked it more than I did.  I hope you like it too, if you try it.