This is a fabulous side dish of squash that I could actually make a meal of! 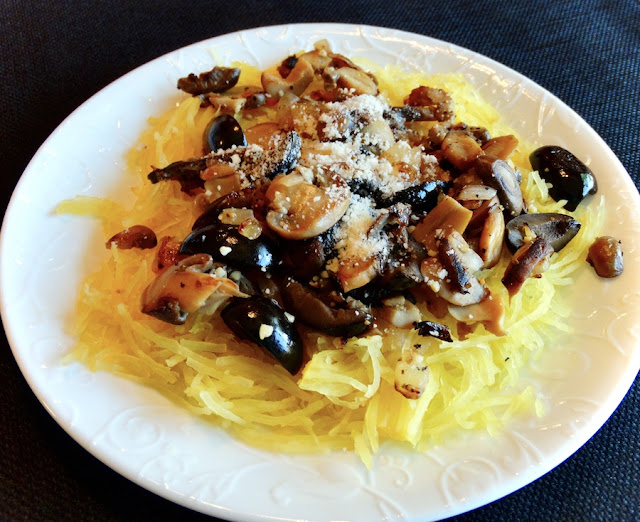 It’s fall and squash season again, with spaghetti squash one of the best, due to its unique texture that has a similarity to spaghetti.

The spaghetti name for the squash comes from the fact that when it is cooked, the flesh of the vegetable is long and stringy in appearance, like spaghetti.

Spaghetti squash was developed in China during the 1890’s.  Images of the Manchuria area have been found that depict a woman with her child cutting spirals of the squash using a rod on a sawhorse. The dried squash gave the people a food source that would last through the cold winter months.

In 1921, it was introduced to Japan by a Chinese agriculture research firm.   The Sakata Seed Company of Japan was the first to market commercially the spaghetti squash in 1934 under the name Somen Nankin.

They developed an improved strain and introduced it in seed form around the world.  In 1936, the W. Atlee Burpee Company picked up and marketed Sakata “vegetable spaghetti” seed for use in the Untied States. 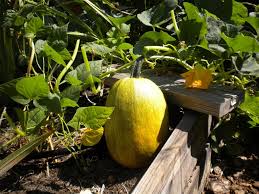 The squash gained in popularity during Work War II when it was used as a substitute for pasta at a time when processed foods were harder to obtain.  They could be grown at home in one’s “victory garden.”

Then the vegetable spaghetti faded into obscurity when food shortages were no longer an issue in the U.S.

It was rarely heard of again until the 1960’s, when it was “reborn” in California as “spaghetti squash.”  The hippie counterculture proclaimed it a healthy “natural” alternative to processed food. 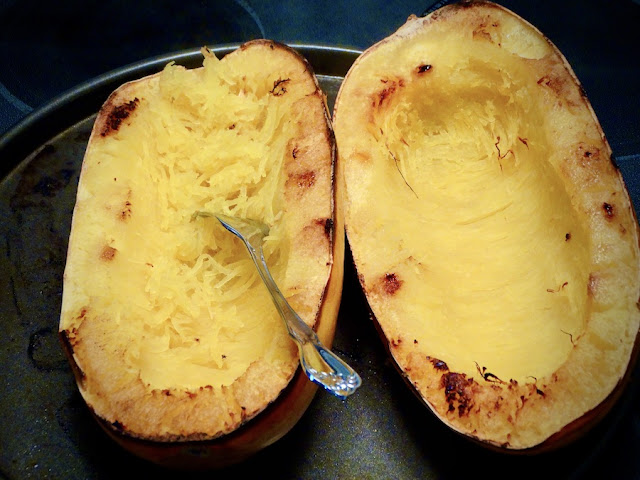 The vegetable eventually went mainstream, and by the 1980’s, its popularity grew even further, due to the more appealing taste and look.  It has a great following these days, particularly among vegetarians and dieters alike.

They seem to be cast aside with their pale yellow color in the produce section of the grocery store, surrounded by the bright acorns, delicates, and pumpkins, but spaghetti squash is versatile and delicious and deserves to be cooked.

The squash can be added to a variety of dishes, such as soups and stews, or topped with pasta sauce and served as “spaghetti.”

This slightly adapted spaghetti squash recipe from Lindsay Olives is filled with meaty mushrooms, onions and black olives with Parmesan sprinkled over all. 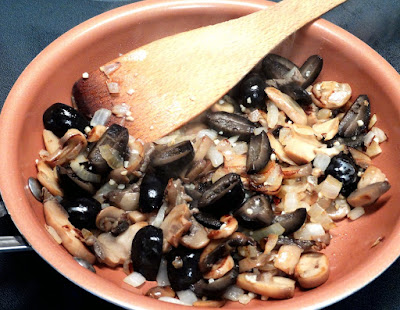 It's very delicious with its great tasty flavors and I highly recommend you making this dish one of these evenings.

I hope you enjoy it as much as Bill and I did!
It is a keeper that I will be making again soon!

Preheat oven to 375°.
Cut squash in half, scrape out and discard seeds.
Place cut side down on a baking dish that’s coated with cooking spray.
Bake about 45 minutes until fork tender.
Heat oil in a large skillet over medium heat.
Add mushrooms, garlic and onion, sauté 5 minutes.
Stir in olives and pepper, heat through 1-2 minutes.
Use a fork to pull out strands of cooked squash onto serving plates, top with olive mixture.
Sprinkle with Parmesan.
Serve

Have A Wonderful Day!

Mushrooms and olives are always such an interesting combo of flavors -- really like it. And this recipe looks terrific! I could make a main course out of this, too!

Thanks, John! It's a filling dish that's easy to make.

Hi Pam!
That was fun to read. I had no idea.
I love it too, I have one ready for cooking.
Yum, yum, yum.

wow that is a beautiful squash and this dish looks wonderful!

I could totally enjoy this as the main. It looks so yummy and healthy too, Pam. Happy Fall :-))

Pam, your Spaghetti Squash with Mushrooms and Ripe Olives looks to be the perfect fall dish. I love the idea of combining the two flavors, squash and mushrooms. We used to eat spaghetti squash when we lived in the US, but when we move here you couldn't find it. But, just this past Wednesday, I spotted some at a local farmer's roadside stand. Now, I'm motivated to return and see if he still has some.

Woo hoo, Ivy! Thanks and hope all is well with you! take care

Thanks, Ron! Glad you like it too! The blend of flavors is a good thing! Hope you find the squash and I would like to find a great dog like Chloe! Take care

Thanks, Natalia! It's good, hope you try it sometime!

Pam, We love spaghetti squash...but while my wife would love your version, I prefer mine with a bit of butter and some pepper. Take Care, Big Daddy Dave

Your recipe looks really delicious! A bold and uninhibited person could also make that sauce for conventional pasta, which would be good with mushrooms & olives as well! I keep meaning to buy some spaghetti squash, you are helping me do it.

Thanks, Dave! No mushrooms, for sure! Butter and S&P works for me!

Hi Mae! Yes, that would be great with regular pasta, glad you mentioned it! It's good squash this way! Take care

Thanks, Gloria! Glad you like it too! Take care xo

Grazie! Good weekend to you also!

I love spaghetti squash and would definitely eat this for dinner!!

I love spaghetti squash and I love mushrooms, so this dish is for me. I also love you Dinner Party picture. So that's how they do things in the northwest suburbs, eh?

Hi Jeff! The squash is great with mushrooms. Thanks about the picture! Nope, not like that here, I'd be run out of town! It's definitely pretty informal with everything here. Just like it for some weird reason. 😉

Thanks, Dawn! Glad you enjoyed it, take care!

I have not had spaghetti squash in a long time. After reading your recipe, Pam, I need to try it again. Thank you!
~Judy

Hi Judy! Yes, it's one of those things that we don't prepare often, but like it when we do. Have a good week!

Happy to see you back at it!

I have mode use spaghetti squash for years...thanks for the reminder and I am loving the combination of mushroom and olives. Thanks for sharing the recipe Pam...have a wonderful rest of the week!

Thanks, Juliana! It's a good veggie that goes well with a lot of different things. You have a wonderful weekend!

This sounds delicious and I like the use of the squash in place of pasta.

Wow! Does that ever look delicious- I love mushrooms and olive and spaghetti squash. It's a perfect recipe for me- can't wait to try it..

SavoringTime in the Kitchen said...

I haven't had spaghetti squash for ages. I always seem to favor butternut and acorn squash. Now I'd like to find one to try this recipe. It sounds wonderful with the mushrooms!

Hi Susan! I agree with the squash and need to cook spaghetti squash more often. Thanks!

Abbe@This is How I Cook said...

It's been a long time since I had spaghetti squash. Now if I could just get Manservant to fall for this!

I know what you mean, Abbe! Good luck!