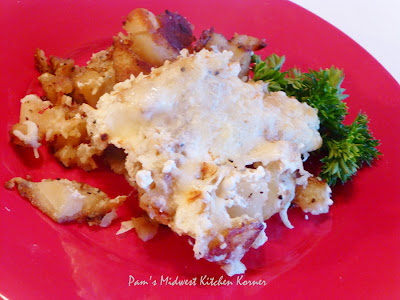 Potatoes go back to 500 B.C. when the Incas grew them, ate them and worshipped them.  They even buried potatoes with their dead, and hid them in concealed bins in case of famine or war, and dried them to carry on their long journeys.  It all makes sense to me…

Heaven to me is a large baked potato, topped with a little butter and salt and pepper or this dish of baked potatoes, which is a traditional French dish, adapted from a recipe by Julia Child and Jacques Pépin for a “golden potato pancake.”
It may not be pretty, but it’s heavenly delicious!

Preheat oven to 425 degrees.
Bake potatoes until soft.
When cool enough to handle, peel potatoes and roughly chop them into ½” to ¾” chunks.
In a 10” skillet, heat the oil and butter over medium heat.
When butter stops foaming, add the potatoes and season with salt and pepper.
Turn potatoes to thoroughly mix in the seasonings, oil and butter.
With a spatula, flatten the potatoes to a smooth, solid layer.
Reduce heat to medium-low and cook for 5-8 minutes.
Close to end of cooking time, shake the pan quickly to loosen the potato cake from the sides and bottom of pan.
Place the skillet in preheated oven and bake for 15-20 minutes until the top is crusty and lightly colored.
Remove from oven and let rest for a minute or so.
Invert it onto an oven-safe serving platter or baking sheet.
Carefully move oven rack to top position and turn on broiler.
Spread top of hot potatoes with crème fraiche or sour cream.
Sprinkle evenly with the cheese.
Place under broiler and broil until the potato mixture is golden and blubbling, about 3-5 minutes.
Carefully remove from oven and serve.

These look yummy and so simple!

I LOVE potatoes. These look ah-mazing!

Does that means NO MASHED POTATOES for Thanksgiving!!!! OH my!!!

I cannot imagine living with absolutely no carbohydrates.....
This recipe sounds delicious. Have a good day. Diane

Oh Wow....I can't imagine not having potato's. We would have starved! We had creamed potatoes every night for dinner...
Good recipe!!
Shug

Pam,Beautiful potato dish! Sour cream, cheese and smashed potatoes in a iron skillet...basic but terrific. I guess we'll have to break down and buy a skillet! Take Care, Big Daddy Dave

Delicious and, for me, a meal by itself!!
Cheers,
Lia.

Yeah, I cannot imagine a household without carbohydrates at all... being Italian especially (you can imagine, no pasta? No bread? No risotto? No polenta? No potato gnocchi?) I need my carbos!!

And I love potatoes!!

I would have ran away from home if my mom did not allow bread, potatoes, rice, and cookies! This recipe is a potato lovers dream! I love it!

"I can’t imagine a house with no potatoes!" - neither can I. This dish looks totally delicious.

Pam,
This dish looks so comforting and delish. I grew up on fried potatoes. I'm sure that you are much happier now that you have potatoes:)

Not the pancake I was expecting but I would be all over these! Yum!